Monopoly on The Money slot

Free Monopoly on The Money slot

Monopoly on The Money slot review 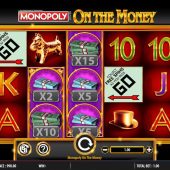 Monopoly on The Money slot is Barcrest's follow-up to their 'Bring The House Down' version and thus their second featuring this famous old board game and its characters. It's no surprise as Barcrest are part of the Scientific Gaming group which also own WMS who themselves have also released a few Monopoly slots such as Big Event and Once Around Deluxe. We get quite plain graphics and animations inevitably overlaid with hotel lobby jazz music in the background and a simple tapping as the reels land. Unlike the board game though, here you will be risking real banknotes to play, so how likely is it you will get of jail here?

On the reels...
There are 10 paying lines over a standard grid of 5 reels and 3 rows, and the lack of lines means the pays are quite high for some symbols. The game logo pays 200x your bet, with the board pieces a nice colour of which Hat pays 100x and Dog or Cat 50x. The Banknotes will pay 20x while the 5 card values all offer 10x. There is a 'Pass Go' Wild on all reels too plus a plain 'Pass Go' which acts as the game's scatter for a quite exciting bonus game!

On The Money spins
Having succeeded in getting 3, 4 or 5 Pass Go scatters (which can include the Wild version by the way!) anywhere in view, you will be awarded 10, 15 or 20 free games. In these Mr. Monopoly is added to all the reels in his trademark bowler hat and the banknote symbols will be overlaid with cash values from x2 to x 50. As well as standard wins, you will get the banknote values added up and paid scattered provided Mr. Monopoly appears anywhere on the grid for that spin. Should he appear twice you will be paid twice for them and so-on. You can't retrigger them as they only appear as Wilds in the free games.

Big Bet
As usual for those with deep pockets Barcrest have made the 'Big Bet' option available, where you buy 5 spin blocks for either 20, 30, 40 or 50x stake. At 20.00 you get sticky scatters and Wilds for the 5 spins to increase chances of free games triggers and wins.

Pay 30.00 and you get the same but with a 'Red Hot Re-spin' if you should have only 2 sticky scatters in view after your 5 Big Bet games, plus a Chance Card available after the free spins should you trigger them, which will either award 7 or 10 extra spins, game over or a small cash prize.

Pay 40.00 and it's the same as the 30.00 above except your reels are extended another row called the 'House Extension' where you may land Wilds, scatters or in the free games Mr. Monopoly.

Pay 50.00 and this is the same as the 40.00 except the reels are extended by 2 rows called, unsurprisingly, the 'Hotel Extension'.

Our View...
Monopoly on The Money slot has some potential in both base game and free spins, although unless you use those risky and possibly irresponsible Big Bets you'll be waiting a while to trigger them. The RTP as usual is 94% if you play less than 2.00 per spin, 96% if paying 2.00 or more and 97.75% if only using Big Bets. So again the game favours the player with a big bankroll over the casual one, and seeing as a significant part of the RTP is allocated to the feature with quite a poor base game to consider it could frustrate many. The graphics and animations are pretty basic and the sounds grate after a while, the saving grace as I see it being the bonus. I won't 'Pass Go' here I'm afraid, I'll simply give this a pass altogether...