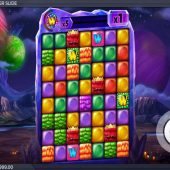 Cluster Slide slot by Elk Studios is another cluster-pays game, surprisingly enough. It's been released in good company in the same month as Relax Gaming's Templar Tumble slot, Quickspin's Crown of Valor slot. I can tell you right now too that you'll be relieved to hear it's far superior to those awful Netent versions such as Aloha! Cluster Pays slot. When I say that, I mean as regards the mechanic because appearance wise it's just a silly, with furry or gem symbols, ludicrous noises, tedious music and a cartoon alien planet background. So can some money cluster around your bankroll here or will it slide away into oblivion?

You get 7 columns of 8 rows each here on Cluster Slide slot with individual tiles, which are replaced from above after winning. Your pays for the maximum of 15+ and minimum of 5 adjacent symbol clusters are Red Furry Thing 500/1x, Orange 300/0.8x, Purple 150/0.60x, Green 100/0.5x with four Gem colours at either 4/0.15 or 3/0.10x. You need successive cluster pays to fill up the Wild Generator which will add various types of Wild modifiers as soon as the winning tumbles end, hopefully perpetuating them. You can get standard Pink Wilds in any position anyway, but generate all 5 Wild types in one spin and you will trigger a 5x multiplier for all subsequent wins in the round!

Short but sweet. Accrue 3 Bonus tiles in any spin, hopefully after generating all the 5 Wilds and having the 5x multiplier active. You get 3 progressive drops which can be retriggered. On the first you get Wilds replace your triggering Bonus tiles and then 3 more added. After wins stop, the second spin will drop two 2x2 Colossal Wilds onto the grid. When these wins stop, your third and final round drops a 3x3 Colossal Wild onto the grid. Unless you've retriggered, the round ends when all pays after this 3x3 Wild are completed. The pay limit here is 10,000x bet.

Cluster Slide slot has a 96.00% RTP and is pretty typical of the cluster pay mechanic, with low win frequency but a higher average yield per winning play. The whistling in the music gave me a headache, the noises are inane and this is what lets down a reasonable game mechanic. Ignoring those issues, you can get some decent base game returns here and the free spins bonus can last quite a while despite only having 3 separate plays because there is usually multiple winning actions. If you land one of those huge bonus spins returns, you'll be happy you chose to play this game, otherwise it's a bit meh...