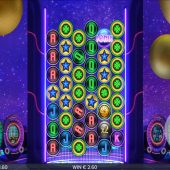 Io slot by Elk Studios is a variation of their tumbling reels game Cygnus slot. That was quite good and here we have a space age theme with zany noises and a starscape background to set off the brightly coloured symbols. Ecuador Gold slot by the same developer also sues this mechanic as does Tahiti Gold slot too so there must be something in this model that players like. Io was a lover of Zeus in Greek Mythology and in this case we presume the name pertains to one of Jupiter's moons, so will this game be sending our bankroll into orbit too?

We have 4096-ways initially over 6 columns of 4 tiles but each successive win opens a new row up on Io slot to a maximum of 8, or 262144 ways. The tiles are circular and like Cygnus slot already mentioned, will roll towards the left if possible as winning tiles are removed and further ones cascade from above. You pay 100 coins to play and 6-of-a-kinds aren't huge with 7 at 5x bet, Diamond 1.5x, Clover 1x, Star 0.6x with four card values at 0.35 down to 0.2x. You get Bonus Scatters which can appear anywhere and a few types of Wild too!

There are 4 versions of the Wild here on Io slot.
Standard Wild - what it says, just a Wild
Charged Wild - had a meter with 4 segments and uses a life each time it's involved in a win, so can be used up to 4 times.
Wild Forge - a Gold Wild which turns the tile beneath into a multiplier Wild which increases each time it's used. When the Forge hits the bottom row it turns into a Multiplier Wild at the value reached.
Laser Symbols - when the beams from 2 Laser Symbols intersect, all symbols up to the intersection point turn Wild. A single Laser simply removes itself and all symbols along its beam.

Accumulate 3 Bonus Scatters to get 7 free games which can be retriggered. You play on the maximum 8 rows now or all 262144 ways. Any Charged or Wild Forge tiles will remain on the grid for the next free drop too, the Charged Wild loses a life between games. You can win up to 5,000x bet at which point the bonus ends, or when you run out of free games.

Io slot is certainly one which retains your attention with its fast and bright graphics, weird sounds and explosive animations. You don't seem to win a great deal in the base game unless expanding the grid to its maximum 8 rows. It appears a large chunk of the 96.00% RTP is allocated to the free games which may take a while to trigger but are good to watch and if you're lucky enough to retrigger them, a great yield can result. When all's said and done, it's only a variant of those games listed in the introduction so the recipe is pretty familiar - whether you make the trip into space to Io is entirely up to you...