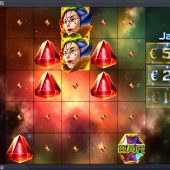 Joker Gems slot is quite different from the usual games Elk Studios make in that it's their first 'cluster pay' slot. Whereas you may be used to seeing features appearing in other Elk Studios games like Electric Sam and Hong Kong Tower, here we get none as such. That isn't always a bad thing if the base game is good and here we get a kind of hybrid of Netent's Starburst and Jack Hammer but with higher potential. The symbols are basic and spin on transparent reels over a backdrop image of a cosmic nebula that seems to have been taken by the Hubble Space Telescope. The sounds aren't as catchy though with some gentle synth music and a faint scraping sound as the reels spin so will Joker Gems have a stellar effect on our bankroll, or with the joke be on us?

On the grid...
There is a simple grid of 25 positions laid out in a 5x5 arrangement. There are only 7 symbols and for any win (which can not be lower than 1x bet) we need to see 3 or more of any kind adjacent. This may sound quite low considering other cluster pay slots require a minimum of 5 adjoining icons but the reels have many spaces on them and the symbols only appear in isolated stacks of two or singly.

The main feature of Joker Gems is that any winning cluster of 3-plus icons ( you can sometimes get two different clusters in a spin) remains in place and the reels re-spin until no more matching adjacent symbols are added to the held clusters. You get paid on a scale from 3 to a maximum of 16+ and I will show the extremes in terms of your stake which is a minimum of 0.20: Joker 700/15x, 7's 500/10x, Bars 300/6x, Red Gem 100/2x, Blue 70/1.5x, Yellow 60/1x and finally Green 50/1x for clusters of 16+ and 3 respectively. There are no Wilds or scatters here. The minimum pays for the higher symbols aforementioned will indicate that Joker Gems is quite volatile and wins infrequent compared to many other games, so what help do we get?

Light chaser
A Comet may appear between spins and snake around the grid and when it stops it will leave behind a cluster of either 4 or 5 identical symbols before the reels land other symbols on the grid. This may lead to some of the bigger wins you experience on Joker Gems.

Jackpots
On the right of the reels are 3 fixed jackpots of 10, 20 and 50,000 labelled as Bronze, Silver and Gold and these may also be used as network progressives at your casino. Whichever, you will get the Bronze by landing a matching cluster on the centre 3x3 positions, the Silver by matching symbols on the outside square of 16 tiles and the Gold for filling the whole grid with the same one. You can apparently win both the Silver and Bronze by filling the centre 3x3 with one icon and the outside 16 tiles with a different icon during the same spin, so Elk Studios tell us in their rules!

Our View...
Joker Gems is something different and at first I didn't like the amount of gaps on the reels and therefore lack of symbols on the grid after each spin. This results in a low win frequency and many runs of dead spins, but to be fair this is to be expected given the lack of any win paying less than bet along with quite large minimum wins for any premium symbol. Once I realised the intent of the math model and volatile nature it became quite exciting when those bigger symbols landed and re-spun, albeit not very often. You have Elk Studios' typical RTP of 96.30% and some potential so along with the basic nature of the graphics and effects this will certainly appeal to Starburst players looking for more win potential. I though, have never been a Starburst player...