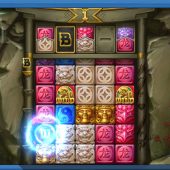 Mystic Orbs slot by Elk Studios is a quite like a hybrid of their own grid slots of previous days such as Ecuador Gold and the later edition Bompers slot along with Push Gaming's The Shadow Order. This is because magic orbs come into play here in this Chinese-themed game too! The background is a rocky cave, gentle oriental music pervades the scene and symbols are of eastern character stones here on Mystic Orbs. So can we add a glow to our bankroll here or will it be a mystic mauling for us?

On the grid...
We need adjacent cluster of 5+ tiles on the 5x5 grid to win on Mystic Orbs slot. The pays for the top band of 18+ and bottom of 5 are: Gold Mask 2000/2.5x, Red 1000/1x, Ivory 500/0.8x, Jade 300/0.6x, Purple 250/0.5x and 3 lower-value character tiles of Red, Ivory and Blue paying 200/0.4 down to 100/0.2x. All winning symbols are removed and replaced from above in tumbles. There is a standard Dragon Wild but you don't get scatters here as the Wild Orbs are what trigger the fun on Mystic Orbs. You have feature cards above each column changing each play and the Wild Orb will collect the one above itself, the Charged Orb collects all 5!

Feature Cards
Bonus - awards the free games
Extra life - awards another drop when you have no more winning combinations
Orb Payout - pays the value stated of 2-100x bet
Multiplier - adds to the current multiplier for the spin or free spins by +1 to +5x
Upgrade - upgrades one symbol type to the next one up (or Wild if highest already) for the next 3 tumbles
Orb Siege - one of the orb's surrounding 4 symbols is selected to surround it, guaranteeing a winning cluster

Free Games
You collect 5 Orbs in any one play through the winning tumbles OR an Orb lands under a Bonus Feature Card. The bonus can be bought in some places for 100x bet and you tend to see more Orbs during it to activate the Feature Cards. You can buy a Super Orb Bonus for 500x in order to have the Super Orb only appearing during your 5 free spins which means all 5 Cards are activated each free spin one appears. Any Orb goes once it's been used but you can get more drop down in tumbles within the same spin. If you're very lucky, you may trigger the Super Orb bonus by landing the Charged Orb under a bonus card in order to trigger it. The pay is capped at 10,000x bet and it's not bad despite the fact there's no extra spins or retriggers, usually due to the multipliers only increasing over the round when they collect.

Our View...
Mystic Orbs slot has a 95.00% RTP so is about average in these days of reduced RTP at many casinos from 96 to 94% for many slots. You can actually and wins over 1000x in the base game when the Charged Orb lands, ironically this will likely lead to a bonus trigger too! The feature isn't great most of the time as it's very volatile, in 10 attempts buying the 500x Super one I couldn't get the money back, the one time I did was when it paid 1780x on the triggering spin I bought but only added 200 to that in the Super bonus itself. It's colourful, easy on the eyes and ears and does have some potential. This game could well need a mystic to predict any good bonuses though...