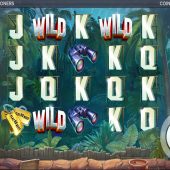 Platooners slot has an action cartoon theme with similarities to the Blueprint game Worms but then again many of the Elk Studios' games have this sort of style. In this particular game the sounds are fairly basic as the icons spin and stop and our transparent reels sit over a jungle film set which must be to accommodate our resident enemies, the snakes. As you may have surmised by now the action revolves around a battle and this forms the basis for decent bonus game, which we will discover shortly. If I know Elk Studios, then the battle for my bankroll will be a much harder fight!

Stacked symbols are present of the gird of 5 reels and 4 rows and like other Elk Studios slots such as Birthday!, Lakes Five and Wild Seas we have their quirky and distinctly odd 178 paying lines in play. This lies somewhere between the more usual 40 to 100 lines for this format and the full 1024 ways which you see on games such as Microgaming's Leagues of Fortune and the Terminator 2 Hot Mode - very strange.

Anyway, the symbol pays are quite straightforward with 10x bet for the highest 5-of-a-kind being the Dog Tags. The Machete, Binoculars and Medikit award 5, 2 and 1.5x respectively and the 4 card values all pay the same at 1.2x. Wilds appear on the centre 3 reels and aren't stacked but 2 can appear on the reels separately.

In-play events are threefold here and the first is 'Rockets' where one of our three Platooners fires his weapon and covers reels one and three with identical symbols for the start of the spin.

'Grenades' adds many extra Wilds to reels 3, 4 and 5 for that spin.

'Bullets' will generate 5-of-a-kind pays from one of the symbols present on reel 1.

If you land 3 or more Golden Snakes anywhere in view you are treated to a 15-shot bonus. A Golden Snake of 3 segments appears, made up of gold discs which reveal cash or mystery when your Platooner fires his weapon at it. You get a special prize for destroying it fully and this will depend on two things: firstly if you get 4 or 5 scatters in the trigger your firepower increases as all three Platooners will be firing their respective weapons at it. Secondly, if the mystery discs (question marks) of the Golden Snake reveal extra shots then you have a greater chance. Up to 100,000 coins can be won according to the rules. The question marks can also reveal bigger than average cash amounts and are reached upon destroying one segment.

Platooners slot is not bad to play and has some decent potential for big wins although the lack of free spins may put some off. That said, the bonus rarely pays paltry amounts of say less than 20x bet and is quite fun to watch as it plays out automatically although on mobile devices you can click on your Platooner(s) in action and fire their weapons yourself. The RTP is the usual Elk Studios 96.30% and volatility is probably a shade over medium with a low base game win frequency but then again you don't see those annoying 'micro wins' of for example 0.1x bet. I'll probably be back for another go at this game, I haven't been 'returned to unit' yet...