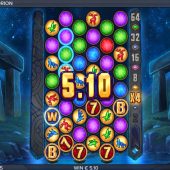 Stars of Orion slot by Elk Studios is a further addition to their tumble game range. We have a night time scene here with a clear starry sky, Stonehenge-like monuments to the side and the disc symbols falling down between two stone columns for a pretty good vista here. Add in the calming if slightly sinister music and this one seems a winner from the moment you open it up. If you changed the background to Egypt you'd be looking at their older Cygnus slot which uses the same type of mechanic as does Io slot plus their Gold series of offerings like Tahiti Gold slot and the first to have the tumbles, Ecuador Gold slot although they use square tiles and not circular ones. So can we have a heavenly win for our bankroll here or will the Sword of Orion slash it?

On the grid...
We have 6 columns of 8 discs here on Stars of Orion slot and winning tiles are removed, with the rest then rolling naturally under the force of gravity to their low natural position left or right before being replaced from above. You will notice the constellation Orion behind the grid which we will talk about soon, but for now we get a top pay for 15+ clusters of adjacent symbols and 5 the lowest and these are: 7's 200/0.75x bet, Stag 45/0.5x, Wolf 40/0.5x, Bird 35/0.5x with 4 plain colour discs Red, Blue Green and Purple from 4 down to 2.5x/0.1x. You can get Wilds and Bonus symbols anywhere and some symbols have blue lit surrounds which mean they spread to merge all separate winning clusters into Super Clusters if they are involved in a win. To help you along, any winning cluster will remove all its similar tiles from the screen if even if they're not involved in the win, thus concentrating the rest. We do of course get plenty of modifiers here!

Magic Meter
On the right is a Magic Meter which requires 20+ winning symbols in any spin to activate. You get a doubling multiplier of 2, 4, 8, 16, 32 and 64x which applies to the winnings as you go and each one of those levels will award a random modifier:
Symbol Swap - swaps adjacent symbols if that creates or improves any winning clusters.
Orion's Belt - extra drop after the screen clears with 3 Wilds in a line placed on the grid.
Orion's Club - same but with 6 Wilds in a club shape.
Orion's Shield - same again, with 8 Wilds in the shape of his shield.
Orion - extra drop with 13 Wilds in the full Orion Constellation.
In all cases the only symbols retained will be any bonus ones.

Free Drops
Collecting 3+ yellow bonus scatters in a spin triggers 10 free drops. During these the multiplier/modifier meter on the right doesn't reset between spins. You can get Super Bonus symbols if the yellow bonus tile has a Red lit frame in which case it will spread to adjacent bonus symbols to hopefully trigger the enhanced feature with awards the same but with more Super Symbols appearing. Your win cap is 10,000x bet here.

Our View...
Stars of Orion slot is quite good to play with nice graphics, sounds and animations albeit a RTP of only 95.00%. The base game doesn't chuck in many wins in excess of 10-20x either but is quite fun to observe. The bonus is not easy to trigger but we wouldn't expect it to be on a volatile slot like this game. When it does come in it's always absorbing to watch and those multipliers to the right can start racking up some big hits, especially if the Super trigger is active. That said, you can get some stinkers with little happening in the first half of the spins which tends to telegraph whether it will be a good pay or not. Is your fortune written in the stars? Who knows...