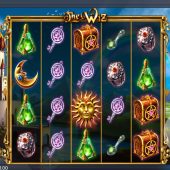 The Wiz slot was perhaps named so to save typing or letters as the game is themed around a Wizard and all his spells, or have a I got it all wrong and it's actually a play on words around 'The Whizz'? Whichever, we have a castle, rainbow and dragons in the background and spin to some quite gentle yet magic-laden medieval music and if I were to choose an Elk Studios' slot with a similar subject there could only be the classic Poltava springing to mind. The Wiz slot looks very good upon first viewing and there seems to be much gold lying around on those reels, so how much of it can end up added to our bankroll?

There are 5 reels and 4 rows here on The Wiz and there's nothing unusual in that, but we do have a weird amount of pay lines seemingly unique to Elk Studios! In this case, as with Platooners and Wild Toro we have 178 possible ways to win here and this is because symbols going across must be linked either adjacently or diagonally, whereas on a 1024-way game they can be anywhere on consecutive reels. So if you've ever wondered why some games have this weird amount, there you go!

The symbols are simple; four high ones of gold and their lower equivalent in silver form. The 5-of-a-kind Gold pays are are 10x bet for Sun, 5x Moon, 4x Chest and 3x Vial. These have red, blue, pink and green gems on them respectively and there are Silver objects with those gems too, paying 0.5 or 0.4x bet.

All symbols bar the Wilds and scatters appear stacked but the Wilds do have a surprise in store - any appearing in a win have a random multiplier of 2 to 5x applied and these are added if 2 or more occur in a way. You get them on all reels and as they don't have their own pay presumably you could get 4 in a win adding up to anything from 8 to 20x for that spin.

You get free games here by getting anything from 2 to 5 scatters. Just the 2 scatters awards one free spin, 3 awards 5, 4 awards 7 and finally all 5 will land you 10 free games. There are two big enhancements here before you consider these amounts to be quite low - firstly your Silver low-pay symbols as described above all transform to the Golden ones on the reels for a better chance of big wins and secondly, your multiplying Wilds migrate via respins one reel to the left and don't reduce your free spins remaining. This can go on indefinitely as long as fresh Wilds appear during these respins. You also get 1 extra spin for a single scatter landing as well as retriggers. This can be a very entertaining and productive bonus round.

The Wiz has great graphics, sounds and especially animations that we've come to expect from Elk Studios and their highly polished slots. The RTP is also very typical at their trademark 96.10% and quite often just getting a single free game yields a very good total in the 50-100x bet range. The win frequency in the base game is probably much lower than you'll be used to but that's the mechanic here and it works very well. There is some big-win potential here as well with multiple Wilds moving across the reels in the bonus round if they land right for you. For me, The Wiz is most definitely the biz...