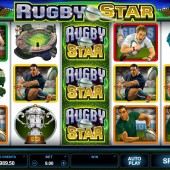 Rugby might not be a sport that immediately strikes a chord for providing a solid base for a theme on a slot game but slots developer Microgaming have seen something that they feel is worth tapping into by releasing this Rugby Star slot.

Hmm, This Is Familiar!

Rugby Star is a 5 reel, 243 ways to win slot that is being launched onto the slots market ahead of the 2015 Rugby World Cup. The developer did the same with its very similar Football Star slot before the 2014 World Cup in Brazil and another twin-like slot in the form of Cricket Star before the 2015 Cricket World Cup.

The slot will hit the right note with rugby fans immediately with symbols on the reels consisting of players from England, South Africa, Australia, and New Zealand. There is also another symbol that shows one player tackling another player. Other symbols include the Rugby World Cup trophy, a rugby stadium, a rugby helmet, and a pair of rugby boots.

The Rugby Star logo acts as the game's Wild and it substitutes for all other symbols, except for the Scatters, to complete any possible winning combinations that might appear on the reels. It is possible for more than 40 Wilds to appear on the reels and Wilds can also appear as Stacked Wilds on reels 3, 4, and 5.

Trigger up to 25 Free Spins with Rolling Reels

The Scatters on this slot are represented by the rugby ball. If you hit three or more of these symbols across the reels then you will trigger up to 25 free spins. Once triggered, the free spins will continue to use the Rolling Reels feature that is included in the base game where multiple consecutive wins can be awarded with up to a 10x multiplier value up for grabs.

Rugby Star also comes with a Wild Pass feature. This will be where up to two reels from reels 2, 3, or 4 will turn completely Wild at random and provide a guaranteed win during the process. Not a bad little feature to keep an eye out for.

That is your lot for Rugby Star. As you can see, the template has been used for its previous incarnations of Football Star and Cricket Star but I did actually develop a soft spot for those slots. I still think Football Star is one of the best football-themed slots out there and Cricket Star was a pleasant surprise. That does not hide the fact that Microgaming have been quite lazy here. The Rolling Reels feature present during the free spins is good to see but we've all been here before. The argument is why bother playing a slot that has basically already been developed twice before? The 125,000 coin maximum jackpot is a slight pull but this all feels a bit too same old for my liking.