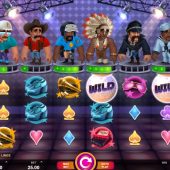 Village People Macho Moves slot by Microgaming was developed by a smaller in-house studio called Fortune Factory but whoever came up with it doesn't spare us the terrible reminder of how Disco music was inflicted upon an unsuspecting public back in the 1970's. Here we have The Village People providing the tunes, luckily with no lyrics and just the beat, and they sit gaily above the reels which are set over a backlit dance floor and somehow we seem to have a sailor added to the original 5 distinctively dressed members of the group. In The Navy no doubt, well hello sailor! Pop and rock groups are often used on trademarked slots, we've had Kiss, Megadeth, Motorhead and Michael Jackson for example already so there's room for all musical tastes it seems. All that remains to be seen is whether our bankroll will be filched here or not.

There are six reels on Village People Macho Moves slot. Each one has a character above it on a lit pedestal and there are 3 rows on each giving us only 15 fixed lines which we pay 20 coins to spin. The 6-of-a-kind wins are 250x bet for the Stacked Wild or VP Expanding Wild which may be mixed. Then 25x for the Microphone, 10x Cassette, 7.5x Vinyl LP, 6x Glasses, 5x Shoes and 3.5x down to 2x for the four card suits. The Expanding VP Wild appears on all reels and each time it does, it will fill one of the 5 lights under each character's pedestal as a cumulative trigger for the features as there are no scatters.

So you've filled the 5 meter spaces under a character, what happens? Well they will all deliver a 5-free spins round with different modifiers and no retriggering, which beginning at reel 1 are:

Builder - 5 spins with a random 2 to 10x multiplier displayed each time.
Cowboy - extra Wild, 2 to 12 randomly placed before each spin.
Policeman - 2 to 4 randomly placed Wild reels each spin.
Indian - 2 Wild reels placed on 5 and 6 for the first spin, moving left for each spin.
Biker - all card suits replaced with symbol upgrades of the same colour higher icons.
Sailor - before each spin 1 to 3 random sticky Wilds are placed on the grid, building up until the end.

Village People Macho Moves slot has actually a good mechanic in place with plenty of entertainment and a great variety of features which aren't too hard to trigger. You have a good 96.35% RTP and some big potential both in the base game and free games as theoretically you could get 3750x for a full screen of Wilds here. Now the graphics and soundtrack are highly subjective and if you were traumatised by atrocious disco music due to your misfortune of being a child in the 1970's like myself, it may be hard to play, compounded by the fact that this lot were some of the worst offenders at the time. You may be surprised, but your balance should avoid a shafting here...