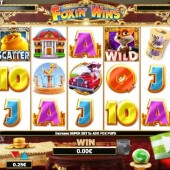 Foxin’ Wins is a 5 reel, 25 pay-line 3D slot from online slot developer NextGen Gaming. It is based around an aristocratic fox and his efforts to try and catch a mischievous leprechaun.

The reels are set against a back drop of the fox’s mansion house with plush furniture and a rich décor setting the tone. The regular game play symbols are all based around the fox and his lavish lifestyle including a Gold Fountain, Red Drophead Car, Bank Notes and his own Mansion.

The Wild symbol is represented by an icon of Fox himself. This symbol substitutes for all other symbols except for the scatter symbols that can complete all winning combinations. If you manage to hit five Wilds across the reels then you can win 2,000 coins.

Interestingly, Foxin’ Wins also includes two Random Bonus features. The Foxy Funds feature is triggered randomly at any time after a cash pay out where additional funds are added on top of the cash you win. The Leprechaun Shake Down feature is also triggered at random. When this is triggered, you will be taken to a second screen where you must chase a cheeky leprechaun and once you catch him then you will shake him until he rewards you with extra coins.

NextGen Gaming slots have not really enjoyed the success that slots from rival developers have with the Sparta themed 300 Shields and the Greek mythological themed Medusa receiving mixed reviews at best.

Foxin’ Wins is at least a step in the right direction for NextGen Gaming. The graphics are sublime and the whole vibe of the slot is a vast improvement on its predecessors. The game play could still do with a bit more creativity but this slot is certainly one of NextGen Gaming’s better slot releases to date. Nobody can argue with random bonus features and the presence of these in Foxin’ Wins just take the enjoyment levels to the next step.