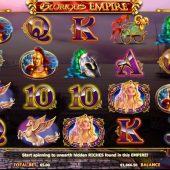 Glorious Empire slot is a Roman-themed game with flashy HD graphics and classical soundtrack. The game is a 5-reel 4-row 40 paylines game. There is a non-multiplying Wild in the form of a golden lion and the scatters are the Colosseum. The goddess is the highest symbol paying 10x stake for 5-of-a-kind (5OAK) right down to the letters paying 1x stake for 5OAK.

The Glorious Empire slot is a basic game, with just one feature. There is an unusual twist with a 5x4 slot with 40 paylines - the wins pay both R-L and L-R hence the lower values for 5OAK. There are no stacked symbols either for this reason.

3, 4 or 5 Colosseum scatters will give you 7, 10, 15 free games respectively. These can be retriggered and they have a decent enhancement - all Wilds are sticky like netent's Dead Or Alive, which is especially lucrative should the game retrigger! There is no multiplier on the winnings though.

The game has a very high RTP of 96.93% and the wins are very frequent, nearly every other spin. The variance is thus low for a Nextgen slot but the graphics and sounds make it easy to play. The scatters aren't too hard to get and the free games are quite exciting although over very fast if you get the basic 7 with no retrigger. All roads lead to Rome....