Queen of The Castle

Queen of The Castle

Queen of The Castle slot review 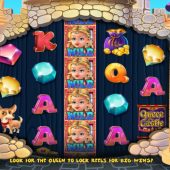 Queen of The Castle slot is a rare multiway game from Nextgen gaming, who tend to stick to fixed paylines with most slots although they do have a few multiways in their catalogue, most notably Cash Stampede, Medusa 2 and Xing Guardian. The title gives the theme away, an adaptation of an old English nursery rhyme with naturally graphics to match and some classical Disney cartoon movie style music to assail our ears whilst we play. The reels are set over the walls of this castle, so will our money condemned to its dungeons eternally?

On the reels...
Nextgen haven't given us 243 ways with Queen of The Castle as you may expect, but with the odd 3-5-5-5-3 reels we actually have 576 ways to win. This has the obvious result of making the pays for 5-of-a-kinds very low and we can't get 5 Wilds as they only appear stacked on the centre 3 reels so the top icon is the game logo which will pay 20 coins, or half your 40-coin bet, for a full way of 5! Like the rest of the symbols they are stacked though, and the next best is the Dog at 12 coins, followed by the Gold Coins at 10, Throne at 9, Orange or Blue Gems at 8, Pink or Green gems at 7 with 4 card values all awarding 6 coins for the full way of 5.

In-play events are many though as randomly all 3 centre 5-row reels may clone and spin together (think Netent's Twin Spin here!) and thus give you a chance of getting those paltry pays to amount to something of note.

Should you see the whole of reel 1's 3 rows filled with Red Treasure Chests you will then get them freeze in position and the card values on the remaining reels will all become Red Chests too, which then open to reveal a mystery symbol which alas cannot be the Wild. If the Red Chests appear in part on reel 1 they may nudge down to trigger this mystery symbol.

If all of reel 1 is filled by Purple Treasure Chests then the same thing occurs as above, only this time the Gem symbols on reels 2 - 5 turn to Purple Chests which in turn reveal one of the top 4 picture icons but alas, again not the Wild.

Crown free spins
You have 3 yellow Bonus Scatters on the centre 3 reels and landing these all at once will reward you with 14 free games, during which you can trigger the Treasure Chest features but will also have the centre 3 reels cloned and spinning together on every spin. You can't retrigger them but now's the chance to actually get some wins of note, something very hard to achieve in the base game!

Our View...
Queen of The Castle slot is, put simply, very tedious and unexciting to play. Yes, we get a good 96.50% RTP but that's the only thing it really has going for it. True enough, the Treasure Chests and random reel joins occur frequently but that's because the volatility is so low that otherwise it would be unplayable, which is the game's problem - a full screen of the top logo symbol would pay a miniscule 238x bet which is hardly reason to rush to it! The graphics and sounds are straight out of an infant's audio book and did I mention a dungeon earlier? I believe I did, and that's where I sincerely hope this game is condemned to for the rest of time...