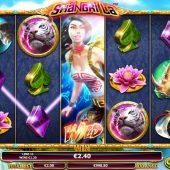 Shangri-La is a mythical place from the novel 'Lost Horizon' by UK author James Hilton, described as a mystical, harmonious valley surrounded by the Kunlun Mountains. The Shangri La slot has appropriately haunting music as a background and several of the creatures from the story. It is a 15-line 5-reel 3-row game, and in keeping with the Shangri La legend has many mystery features appearing in the base game before we even embark upon our journey to the features.

Usually, I would mention wilds now, but Shangri La slot incorporates most of their actions into random in-play features. These only appear on reels 2, 3 and 4 but will double any wins. So on any spin extra ones can be added to the reels and these will appear with a surround of flames should they land. Our benevolent lady may also randomly turn any one, two or all three of reels 2, 3, and 4 Wild on any spin too. There is also a random addition of the golden lantern scatters to the reels which enhances the chances of the bonus rounds.

So when we get 3 or more golden lanterns, you pick one which will then reveal a spinner which stops on one of the 4 features.

The first is simply a trail, the same as appears in the Rainbow Riches game when triggered by 3 or more leprechauns. You spin the wheel and move 1, 2 or 3 positions up a bet multiplier trail. You get from 1-100x stake. An X stops and awards the prize.

If you are fortunate enough to avoid this quite poor feature, then you may hit the Chest Bonus. This, however, is even worse as you open chests until a stop is picked and you win a maximum of a staggering 15x stake.

If your adventure to Shangri La appears doomed now, there is redemption with the first of the 2 free spins features. You may get 8 free spins in which the random in-play (wild not scatter) features described above are far more likely. You can though get a retrigger.

Shangri La's 4th. the feature is perhaps the best. You get 12 'Super Free Spins' which can again be retriggered but this time you get guaranteed in-play wild features appearing. In the standard 8 free spins, they are more likely, but not guaranteed as they are in these super spins.

The game has a decent TRTP of 96.63% and the in-play wild features are quite frequent. They rarely produce significant wins though so I rely on the bonus features for my entertainment. This is where I disagree with these 'random' bonus choices whereby the slot foists upon you a bonus that you are trying to avoid. Having waited for a bonus you want - one with potential rather than capped at 100x or the paltry 15x stake! Having said that my adventure into the Kunlun Mountains was quite a fun one, so I may make a return there one day...