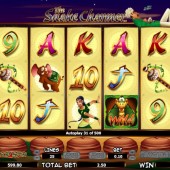 NextGen Gaming have developed a few slot games that are simple, fun and at times rewarding and The Snake Charmer is one of them. The name of this slot should give away the theme, but if you haven’t guessed - it is based on an Indian Snake Charmer, who conjures wins through playing his pipe and putting the snake under his spell.

There is very little to this game, with the snake symbol being wild and substituting for any other symbol except the scatter. The bonus can only be triggered by landing 3 or more of the scattered Snake Charmer symbols. This will give you 10 free spins with the added benefit of one of more expanding wild reels on each spin. I should just point out that this is not guaranteed on every spin, but if the rising charmed snake wild reel appears then you can be in for some very nice wins. Ideally you want to get multiple wild reels in the same spin, that’s when it really pays.

As I said, The Snake Charmer really is a simple slot, so I don't have much else to tell you about this game. But I would say that it is fun to play and quite addictive. I tend to play it more than some of the other NextGen slots such as the 5 reel Fairies Forest or the Mad Mad Monkey slot game.