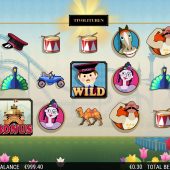 Tivolituren slot is one you'll need a translation for! It's actually Danish and refers to the famous Tivoli Gardens and fair in Copenhagen and Tivolituren literally means 'Fairground Rides' in English. It's not the first Scandinavian title we have had though, as Play'n Go did release Fodseldagen and Charterrejsen a while back and you can look them up on the internet if you want a translation! Now given the subject matter it was inevitable the theme would be represented in as infantile a manner as possible and the child's music box soundtrack makes it even worse. The reels are translucent and lie over a cartoon fairground as you'd expect with symbols to match, so will Tivolituren be taking your bankroll on a rollercoaster ride too?

We get 20 paying lines via a standard 5x3 grid on Tivolituren slot which you may pay as little as 10 coins to play. The best pays aren't as low as the theme would lead us to believe though, with the Wild paying 100x bet for 5-of-a-kind, Strongman 25x, Columbine or Harlekin 15x and Karussel 5x. In keeping with the subject matter obviously directed at an audience who aren't even old enough to play Old Maid yet, there are no card values for the low pays, but instead we have 5 toys in the form of a Peacock, Hat, Drum, Camel and Car all paying 2x bet for a full line. Tivolituren does have a few surprises up its sleeve though!

Aquila is a ride that not only rotates but spins you 360 degrees as it does so on another axle. If this appears during a spin it will sweep the reels up to 5 times turning a reel gold on each pass and each of the 4 character symbols landing on gold reels will award 1-50x bet.

Rutschebanen is a wooden rollercoaster which appears and travels around the grid, turning up to 10 symbols Wild with a maximum of 2 on any given reel.

Ballongyngen is a Ferris Wheel and when this randomly appears at the end of a spin it will apply a multiplier of up to 20x on any win.

Landing 3 or more Tivoli Castle scatters triggers a choice of three free games rounds, unsurprisingly all centred on the above Random Rides which will thus occur on every free game.

You get 6 spins if you choose Aquila, 9 spins for Rutschebanen and 12 for Ballongyngen and in all cases you may retrigger them with 3 or more scatters.

The game mechanic of Tivolituren slot isn't bad in spite of the theme and it's possible to win 100x bet on up to a 20x multiplier so a very slim chance of big pays certainly exists. The RTP isn't great at a relatively modest 95.50% and I shan't even bother commenting on the graphics and animations here which would be better used on a pre-nursery DVD. It seems a shame a decent idea and game mechanic has been ruined by the graphics here. I have one way only of dealing with the characters here from now on and that's to dodgem...