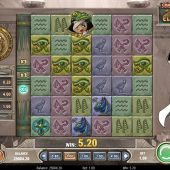 Charlie Chance is back with the Curse of Cleopatra and the monochrome appearance is this time applied to an Egyptian tomb in the background. We have a dancing one-eyed Cleopatra by the grid here who invites us to 'kiss her asp' when certain tiles appear and the Egyptian music is rather humorous as we drop these stone blocks in. The previous Charlie Chance slots were quite good if you recall the Xreelz slot and the first of the series, Hell to Pay slot. This time Play'n Go have reverted to their old cluster pay grid-based formula like numerous other games including Energoonz slot. So does our bankroll have a chance here or will we end up skint and feeling like right Charlies?

On the grid...
There is a 6x6 grid here on Curse of Cleopatra slot with pays for 5+ adjacent clusters of similar blocks, with winning tiles replaced in tumbles. Your max pay for symbols is for clusters of 15+ and minimum 5 so those pays are: Cat 500/2.5x, Flower 125/1.25x, Eye of Horus 50/0.75x, Ankh 20/0.5x with 4 Hieroglyphic tiles from 10/0.25x down to 2.5/0.1x. Scarab Wilds can appear anywhere as can Cleopatra scatters. You have an in-play multiplier where every 3 winning tumbles adds 1x to your round multiplier up to 3x within the same spin. Naturally Play'n Go provide us with a few random modifiers from good old Cleopatra!

Modifiers
You can be granted the following on any spin if Cleopatra is feeling generous:
Cleo's Columns - 2 adjacent reels will synchronize with the same tiles. During this feature, a 2x2 Charlie Mega Symbol could land and becomes sticky. Any low symbols toughing him are destroyed after any pays then he turns into a Wild for his final performance.
Flying Scarab Wilds - 5-8 are randomly placed on the grid.
Serpent's Trail - on a losing spin the Asp appears and highlights a string of symbols which are either destroyed or transformed into matching winning symbols.

Free Spins
Landing 3 scatters awards 8 spins with +4 for each over the three. Your triggering multiplier (if any) is carried over and now it doesn't reset between spins each time 3 tumbles increase it by 1x. It can reach a maximum of 10x. Cleo's Columns are active every spin and the other two modifiers can still occur. We are told 5,500x is possible here and you cannot get retriggers but each Cleopatra scatter landing awards +1 spin.

Our View...
Of all Play'n Go's grid games I'd say Curse of Cleopatra is the best both in appearance, sounds and overall involvement. You can get some good hits in the base game and Cleopatra is quite benevolent with her random modifiers too. The free games are not too rare to ruin any anticipation or enjoyment for the player but are quite volatile despite being fun to watch. Take the 5,500x claim with a pinch of salt here because as with all Play'n Go grid slots the 5,000-odd times stake claim will likely prove to be just that if you consider player screenshots and videos where anything over just 2,000x has been extremely unusual! That said, I will still give Charlie another chance with our friend Cleopatra...