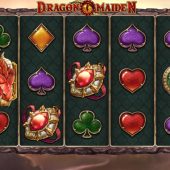 Dragon Maiden slot has the appearance of Netent's Dragon Island but I can assure you it's a very different game when unwrapped. The dragon is a theme perhaps used in frequency only behind Egypt and Leprechauns and there's only so much you can do with it, as the appearance and graphics confirm here. That said, with the roars and flames dragons can provide some great visuals and of course they feature heavily in Chinese-themed games such as Dragon's Fire and Dragon Emperor to name but two. The reels here are pretty dull and lie in front of a gloomy mountain scene and only come to life a bit when Wild wins or scatters land, otherwise we just hear a quiet dramatic musical score while we spin. So will Dragon Maiden roar into life for our bankroll or will the flames consume it for evermore?

The standard 5 reels and 3 rows here have no pay lines as such because we have 243-ways to win for any adjacent symbols from left to right. The icons are stacked for the lower values and single for all the higher pays with the Maiden being the random Wild and the Dragon the scatter, both appearing on all reels. The Maiden Wild can randomly expand to either 2 or 3 rows but not often in the base game which is a shame as she is the best 5-of-a-kind pay at 250 coins, 12.5x our 20-coin bet but again remember she is random only and not always activated as a Wild at all. The Red Jewel pays 200, Purple Ring 150, Blue Dagger 100 and Green Coin 50 with the four card suits paying either 20 or 10 coins for a full way of 5. We get quite an interesting and exciting sequence to begin the free games though.

You need 3 Dragon scatters to roar into view for 8 free games, 4 for 10 games and 5 for 12 games. Don't worry if you only see 2 though as this will trigger a respin with them held in place and the respins continue until no more are added or all 5 possible are in view.

Things get very tense now as during the free games any Dragon will raise the height of its reel by 1 row thus increase the ways to win in play. If the reel reaches 6 rows high you are awarded 1 Golden Spin after the basic free games end. This will remind you of the feature in Big Time Gaming's White Rabbit if you've ever seen it! Now if the reel is already 6 rows high and another Dragon lands, this will simply add another Golden Spin to be played after the standard spins.

After the free games end you may have anything from 1 to as many as 10 or more Golden Spins to play. The reels all expand to 6 rows during these irrespective of how many reels you fully expanded previously. You are now playing on a 7,776 way grid for the Golden Spins you may have collected. As with the basic free games, the Maiden may expand to 2 or 3 rows high when she appears and some mighty big wins can be achieved here - Play'n Go tell us we can win up to 5,000x bet during the bonus as a whole. Not bad!

Dragon Maiden slot didn't look up to much upon first appearances but I soon discovered it is an exciting and absorbing game and despite the feature volatility it does trigger very frequently too. Like all games of this nature, the feature may often reward you with very little but it's great to watch and we get a decent 96.31% RTP to boot and of course the chance of some huge pays. The sounds and effects are limited but the game isn't tiring to watch and play, especially the 2-scatter respins for the feature trigger which do often produce the desired result. The base game isn't bad at all although the Maidens only becoming Wild randomly does take a bit of getting used to. Do yourself a favour, book an hour with the Dragon Maiden - you won't be disappointed...