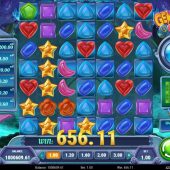 Gemix 2 slot by Play'n Go has been a long time coming, given that between the original Gemix slot and now there have been many grid-based cluster play games issued by this provider. These include the childish Moon Princess slot and for reasons unknown to me, the even sillier Reactoonz and Reactoonz 2 slot have proved quite popular. We keep the same appearance with various shaped gems filling the reels, a fantasy adventure theme along with the appropriate dramatic music and naturally the various worlds you can enter as you play. So can we travail these places with gains for our bankroll or will it be a very costly round the world trip?

Same as before, Gemix 2 slot has a 7x7 grid with cascading tiles and pays for adjacent cluster of 5+ symbols. First we'll see the maximum and minimum pays for each regarding the biggest and smallest clusters of 15+ and 5 respectively. Stars 200/2.5x, Heart 100/1.5x, Crescent 50/1x, Flower 25,0.8x, Pentagon 10/0.5x, Square 7/0.3x, Triangle 5/0.2x and finally Rectangle 4/0.1x. As before, there are patterns of tiles behind the symbols and you need to uncover the whole thing via means of winning tiles to move to the next world. You also collect modifiers by using enough winning tiles in one spin.

You need 25 symbols to get each of the 4 modifiers in turn or if lucky enough to trigger with 50+ symbols you get all four of these modifiers simultaneously along with a 2x multiplier. If this win results in 50+ more symbols, the event is retriggered, this time with a 4x multiplier. This can rise by 2x each time to a maximum of 20x. The Crystal Charges are:
Nova Blast - a random symbol explodes everywhere it appears, turning adjacent tiles to the same symbol.
Crystal Warp - a random symbol is chosen to be transformed into a better one.
Light Beam - one tile is selected and shoots out light beams, which will transform every tile they cross to the same one.
Chain Lightning - two opposite corner symbols shoot lightning to each other, transforming all hit symbols to the same as one of the corners.
World Bonus - this is not a modifier, but a prize based on a small percentage of all wins you had between starting the present world and uncovering the next. Pick from 2 pockets the G-NOME offers you, one empty and one has the prize!

In this randomly-triggered modifier, one of four Wild types can be added to the grid:
Prince Wilds - up to 2 of 2x2 mega Wilds can appear and substitute for all symbols with a 1x multiplier or higher if your round has one applied already. They only count as one tile though, not 4!
Miner Wild - up to 10 added to the grid.
Princess Wild - spreads from edge-to-edge of the grid.
Magician Wild - up to 5 sticky Wilds can be added to grid.

Gemix 2 slot is a bit silly but nevertheless I still think it's the best format of all Play'n Go grid games, with a 96.25% RTP. You have 7500x bet potential and it's not as brutal as their others despite having this higher potential win. Your whole experience relies on long series of wins within one spin and getting the multiplier increased as you go. Do this and then trigger the modifiers along with a Wild feature and you will likely be getting a big 15+ cluster of good symbols and possibly one of those 4-figure hits. Even if you don't decent wins of a lower order can be frequent enough to keep your balance happy...