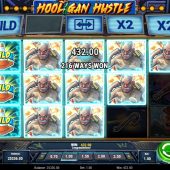 Hooligan Hustle slot by Play'n Go seems to be based on the back streets of an English town judging by the voice soundbites of the various yobbos such as 'You want some??'. A back alley with a wrecked Police car and various skinheads gesturing across at each other along with loud punk type music is our scene here and it is quite gritty and realistic. Not quite on the level of iSoftbet's The Warriors slot or NoLimit City's classy East Coast vs West Coast slot or if you like a bit of law and order thrown in, Netent's Hotline 2 slot. So can our bankroll escape a beating here or will it be getting a good kicking too?

On the reels...
We start on Hooligan Hustle slot with 5 reels of 3 rows each, stacked symbols and 243-ways to win although this can be expanded up to 248832-ways in the features! You will see a Rumble Row above the reels which can activate on any spin offering 1-5 rewards above the reels like Netent's Egg-o-matic slot for example. You can get Wild Reels, Joined Reels or 2x Multipliers if a win goes through that reel it's selected on. You may randomly see a symbol on any spin get selected to split into two wherever it lands, except the scatter. The final modifier is the Crate which is a Mystery Symbol and reveals anything except again, the scatter. The Traffic Cone Wild appears on all reels as does our Molotov Cocktail scatter. Now the 5-of-a-kinds which are Scatter 100x bet, Wild or Skinhead 2x, Green Hooligan 1.8x, Purple 1.6x, Blue 1.4x and five objects of Knuckleduster, Crowbar, Club, Lager Glass and Brick paying either 0.5 or 0.3x for 5OAK.

Free Spins
You can choose your volatility here by selecting:
LAIRY! - 10 spins with 2+ Rumble row modifiers active per spin.
RIOT! - 5 spins with 3+ Rumble Row modifiers per spin.
ANARCHY! - 1 spin with 4+ Rumble Row modifiers in play. May not sound much but look at the screenshot here and see what 4 symbols on the Rumble row can do randomly in the base game! The 2x bet Hooligan symbol over 54 ways of 5OAK with x2 and then x2 multipliers for 216x 2.00 for a 432x win! Shame we didn't have it randomly split as well for a colossal win.
No retriggers and we are told 10,000x is possible here.

Our View...
Hooligan Hustle slot has a 96.20% RTP and is a good game with its potential big in both base game and free spins, as long as you can take the aggressive soundbites constantly like 'Who are ya?' and 'Have it!'. Modifiers are aplenty here although free games are a little rarer than I expected for a Play'n Go slot. They are good to watch though with the guaranteed Rumble Row modifiers per spin and don't forget if you choose the 10 spins there's nothing to say you cannot hit one or two of them having 4 modifiers at once, but it's rare. The Splits will never give you the maximum 248832-ways as you would need a full screen of one symbol, split into six per reel then multipliers at the same time to make them effectively 12-high per reel! Nevertheless, you could well leave this trashy alley with a fatter wallet than when you entered it...