Sisters of the Sun slot

Free Sisters of the Sun slot

Sisters of the Sun slot review 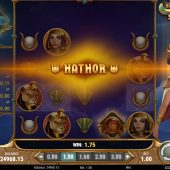 Sisters of the Sun slot by Play'n Go is yet another Egypt themed game but this time it's all female goddesses and deities. We get an old formula here namely the PnG grid format that began with Energoonz slot and around the same time Cloud Quest slot. It has since been copied with a small variation each time on games like Troll Hunters and more recently, Troll Hunters 2 slot. We have the obvious desert background with pyramids and the relevant music , sounds and symbols so nothing revolutionary so far. Can the sun shine on our bankroll here or will it be a case of the spiteful sisters?

On the grid...
You have the usual 5x5 grid of this mechanic with winning symbols not replaced, but they non-paying ones descend down their columns after any win to form new combinations on Sisters of the Sun slot. As usual there are symbols to uncover in the vacated positions but we'll get to those later. For now, you get paid for horizontal or vertical lines of 3 to 5 symbols with all 3OAK winning lines creating a Wild from their centre tile and the 5-of-a-kind pays are: Sun Wild 30x bet, Sekhmet, Hathor or Bastet 10x, Mixed Sisters 5x, Asp or Sun Jewel 3x and Cat or Fronds 2x. Naturally, there is more to the 3 sisters than meets the eye.

Goddess Power
After any losing spin a Goddess can randomly appear to award their power.
Bastet - removes 2 sets of symbols.
Hathor - awards 1 or 2 Wilds.
Sekhmet - converts one set of symbols to another.
Sisterhood - you can land a single Scroll to get a free re-spin with all 3 of the Goddess Powers activated one after the other. Clearing the grid during this awards the free spins but you get no cash reward for doing so.
Clear Grid - in a normal spin but not Sisterhood, this will award 50x stake on top of your win.
Eye of Ra - there are always 5 of these behind the grid each spin. Now usually on this mechanic you need to uncover 5 symbols to trigger the bonus, but not here! These symbols will each add 1x to the round multiplier for each one you expose which applies to any pays after it's revealed but not those before. So you can x6 at best.

Free Spins
You can choose your volatility here after you trigger them by clearing the grid on the Sisterhood feature. For the duration the multiplier is never reset and only increases. Choose a Goddess Power to be active throughout:
Bastet - 8 free spins with each Scroll landing during them adding +2
Hathor - 5 spins with +3 for any Scroll scatter landing in the round.
Sekhmet - 4 spins with +4 spins for any Scroll landing.
The maximum you can get is 150 spins and we are told 5,000x is possible.

Our View...
Sisters of the Sun slot has a 96.20^% maximum RTP but check the rules at the casino you play at as it can be as low as 84.21% I did think "Oh, not another grid-reveal game!" at the beginning but I must say the game isn't boring. It runs smoothly with nice sounds if not as colourful as it could be. The base game multiplier via revealing the Eye of Ra symbol is a good touch as is the single-scatter for the Sisterhood spin, as well as the usual random losing spin modifier feature. Some regular good mid-range wins can be had. Free games may be hard to land but can really pay well, it's all about landing that extra spin scatter as the more spins you get, the more chance there is of accruing a high multiplier to release that locked-in potential. Play this slot and you could fall in love with these sisters in an instant...