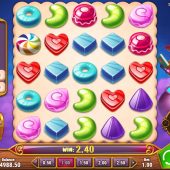 Sweet Alchemy slot by Play'n Go is yet another of their grid-based games along the lines of Gemix (the first one) and of last there's been several including Moon Princess slot and lately the popular Honey Rush slot which would be my pick of the lot. Here we get a juvenile cartoon theme of a child witch stirring a cauldron of sugar in purple clouds as the background with silly candies on the reels and infantile squeals of delight as wins drop in. So will this sugary scene add a sweetener to our bankroll?

We get the same old 5x5 grid of 25 cascading tiles needing 4 or more to land adjacently to win. As we collect winning tiles, a Sugar Rush meter is filled to the right of the grid which triggers our child witch into action with modifiers to help perpetuate the wins and hopefully accrue enough winning tiles to trigger the main event. The pays for the minimum and maximum 4 and 8+ symbols are Star 30/1.5x bet, Heart or Pink Sweet 20/1x, Red Sweet 15/0.8x, Blue Square 6/0.3x, Green Bean 5/0.2x, Purple Cone 4/0.2x and finally Blue Circle 2/0.1x for 8+ or 4 respectively.

The Sugar Rush meter is filled by collecting winning tiles and each time will add 2 standard Wilds at first segment, 2 Striped Wilds which remove the entire row or column when part of a win, then Dotted Wilds which remove all instances of a random symbol from the grid when they form part of a win. If you now proceed to fill the whole meter with all 38 symbols after the Dotted Wilds, you trigger the Mix The Elixir free rounds.

Having triggered this, you play on a 9x9 grid and get 3 Candy Spells like Random Wilds, symbol removals and shuffles from the child witch to help you win with each 3 winning symbols adding another modifier or spell to a maximum of 7. You now have targets in your meter for 3 specific symbols which will earn you a Star once you've got enough of them. Get 1 Star to trigger the Elixir of Power Bonus where you get sticky winning clusters and try to join more on with each cascade or modifier. The next 2 Stars will allow one or two enhancements to your total accumulated afterwards.
You pick from chocolate squares to get 3 identical Elixir Bottles which are either 2, 5 or 10x bet cash awards or your entire win thus far can get a 3x or 5x multiplier! If you've collected the third Star you then take a move on the Map which contains cash and Treasure Chests. Land a Chest and you then get an award equivalent to 15% of all base game winnings since you opened the last Chest! Play'n Go tell us 5,000x is possible, but then they say that for most of their slots.

Sweet Alchemy slot wouldn't be a bad mechanic to play if it wasn't for the utterly ludicrous and childish appearance and theme. If your IQ is higher than your shoe size then I can't see how you'd enjoy playing it at all. The only saving grace is the decent 96.50% RTP if you are playing the factory setting and not a reduced percentage version as you ight at some casinos. You can win several hundred times bet in the full level bonus when you collect the 3 Stars but I'd guess the stupid voice of the girl witch would have driven you away long before you get it. This sweet game soon soured for me...