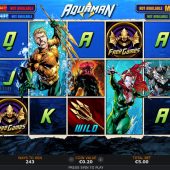 Aquaman slot is another addition to the Playtech DC Comics franchise of slots and joins Green Lantern, The Dark Knight and Justice League and numerous Batman versions in that category. Unsurprisingly the background is Aquaman's underwater city over which the trnasparent reels spin with the bubbling sound effects and music from the cartoon to complete the scene and we will no doubt see the heroes and villains of the Aquaman cartoons soon enough. The game is of course linked in to the DC Comic's progressive random jackpots network, but will our bankroll keep afloat or sink to the bottom of this watery world?

There are 243-ways to win on Aquaman slot therefore you have the appropriate 5 reels of 3 rows each with some symbols stacked. You need to pay 25 coins for a spin and the 5-of-a-kind awards are 20x bet or 500 coins for Aquaman, Mera 350, Ocean Master 300 and The Trench or Black Manta 200. The remainder are five card values awarding 150 down to 50 coins as they descend in order and we get Wilds on the middle three reels and scatters on all five. Surely one of these submarine saviours can reward us for their presence though?

Should Aquaman appear fully stacked on reel 2 he will award you Trident Wild Respins whereby he will launch his trident onto the reels to create 3 adjacent Wilds which will freeze in position and you get respins until a win is formed with them.

If Mera lands in full on reel 4 you get awarded Ocean Rush Respins - this works a bit like Jack Hammer spins, whereby a symbol will be selected and lock onto the reels which respin until no more of that symbol is added.

It is possible to combine these two features if both Aquaman and Mera land fully in the same spin!

Three or more scatters awards 8 free games with up to 16 for all 5 in view. These can retrigger too and just two scatters earns you 4 extra free games as well. During these games Aquaman becomes golden and each time he appears four times he will then replace one of the four villains on the reels so if he appears 16 or more times then ALL character icons are then the highest-paying Aquaman icon for the remaining spins. Some good pays possible when this happens!

Aquaman slot is possibly one of the better DC Comics games as it looks and sounds very good when nothing is actually happening, but when it does you get some good animations especially on the respin features. The RTP is 95.99% of which 0.99 is the progressive jackpots contribution so unlike some Playtech games the basic RTP hasn't been decimated by those donations. The free spins round is quite absorbing especially when retriggering to add to your chances of converting the villains to the top icon, and of course contains some decent cartoon clips. Given a chance, I would happily dive back into this slot again soon...