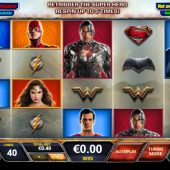 Justice League slot is Playtech's latest addition to their DC Comics sci-fi/fantasy range and joins esteemed games such as Green Lantern and Superman 2, although you may have already played the Justice League game released by Nextgen several months beforehand with the same title! The reels lie over a post-apocalyptic landscape and you are treated to a whole range of classic characters too, with a soundtrack of dark metallic music and audio effects as you play. So as the scene has been set for these characters to battle evil and prove their worth, will it be a struggle for us too to keep hold of our bankroll?

There are 40 pay lines over a 5x4 grid with the character icons all appearing from single tiles up to the whole 4-rows high in stacks and unsurprisingly they will offer the best 5-of-a-kind pays here. You pays 40 coins per play and Batman pays you 500, Superman 400, Wonder Woman 300, Aquaman, Cyborg or The Flash paying 150 coins for the full line. How did I guess that Batman would be the highest symbol, given he appears on numerous other Playtech and Ash Gaming DC slots - I must be psychic! We don't get any boring card values here, but logos from the 4 of the characters, the Batwings and Superman icon pay 100 coins and the Wonderwoman 'W' and The Flash's Lightning Bolt pay 75 for all 5.

There is a 'JL' stacked Wild on all 5 reels too so a full screen is possible which as all five pay 750 coins and we have 40 lines, would award a not-too shabby 750x your total bet. Now Playtech wouldn't waste a trademark with a basic game and that leads us to the random in-play event; a 'Feature Frame' may appear at the bottom of reel 5 and if a character lands in it, it turns Wild and also turns any others of the same kind in view into Wilds. Should this yield no win, then you get a re-spin. If a different character lands in the Frame during that re-spin then they both turn Wild and again if a win fails to materialize, it recurs until one does. This, as you may suspect, features heavily in Justice League slot's bonus rounds.

There are cube scatters on reels 1, 3 and 5 and these are Bronze, Silver and Gold respectively. Land all three and then you are taken to select one of six different free games events, one for each Superhero. You need to trigger the bonus 5 times to unlock all six choices, but when you have they all become available for you to select.

The Flash - 15 free games and like all the rounds, the Feature Frame is present on every spin. Any Superhero landing inside it will become a Wild everywhere it appears on the grid.

Cyborg - 12 free games and also turns a Superhero Wild in the frame, but if one doesn't land another Feature Frame is added for the next spin to increase the chances.

Aquaman - 10 spins and this time any symbol bar the scatter landing in the Frame turns Wild across the grid.

Wonder Woman - 7 spins and this time we get an 1 to 5 Feature Frames added for every spin, and any and all Superheroes landing in them turn Wild.

Superman - 5 spins and this time a giant 2x2 Feature Frame is added for each spin, and any Superheroes will turn Wild if the land within it.

Batman - 2 free spins whereby every Superhero on the grid turns Wild if any one lands within the Feature Frame.

You cannot get any extra spins or retriggers in the Batman or Superman option, but all the other four will award 3 extra spins for 2 scatters or a retrigger for all 3 appearing.

The Playtech DC Comics Progressive Jackpot game can randomly occur on any spin too, awarding either the Mini, Minor, Major or Mega.

Justice League slot is packed with features and has an excellent game mechanic and bonus construct too. The RTP is quite good at 96.31-96.33% which includes a 0.99% Progressive contribution which is quite important as in the past several Playtech Marvel Progressive slots had quite disappointing RTP's of only just over 90% in the base game. If I had to be fussy I'd bemoan the lack of movie clips or character animations when their respective wins occur on the reels which you get on other Playtech trademark slots such as The Matrix and the previously mentioned Green Lantern, but otherwise an entertaining game on the whole. I shall certainly seek out the favours of these Superheroes again in the future...