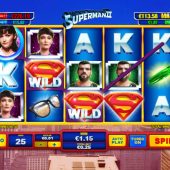 Superman 2 slot is yet another DC Comics trademark slot from the Ash Gaming/Playtech stable. The other versions like the Batman series including Riddler Reels, Mr. Freeze Fortune and Catwoman Cash have varying levels of playability and mechanics that will satisfy the player - or not. Superman 2 or 'Superman II' as it is commonly written is a reference to the 1981 movie, which brought the world the three villains from Krypton, lead by darkly-cruel General Zod (superbly played by Terrence Stamp). So have Playtech made good use of the Superman rights in this case?

You get 5 reels with 25 pay lines and there is the musical soundtrack from the Superman 2 film in the background and suitable Superhero noises when you win. Superman is the highest paying symbol at 40x stake for 5-of-a-kind and naturally his arch-enemy General Zod appears as a picture symbol along with his beloved Lois plus 2 more villains. The card symbols pay the lower awards at 2x stake for the lowest J and 10. All the features are accompanied by scenes from the Superman 2 movie which is a pleasing addition!

The game's Superman logo is Wild and appears on all reels and can be improved by the random in-play Superman Wilds feature. He may appear on any spin and zoom up and down or left and right to add 2, 3 or 4 Wilds to the centre 3 reels before they finish the spin. The Daily Planet Newspaper logo appears on reels 1, 3 and 5 and when all 3 appear you get a 5 revolving newspapers each with a headline naming one of the 5 possible bonus rounds. Press 'STOP' and the slot chooses one for you:

You have a range of bonus features in Superman 2, which offer a variety of different rewards:

Battle for Metropolis - pick a Superman symbol to reveal a cash prize or 'collect'. You may pick an 'X-Ray' too which automatically picks the best hidden cash award. Any Kryptonite revealed awards a life redeemed against the 'collect'. Complete all 10 levels and you get a big award at the end!

Phantom Zone Spins - unlimited spins with a floating 2x2 Phantom Wild stopping randomly each spin. There is a scrolling window at the bottom which will stop on either a 2x or 3x multiplier for that spin, a clock which ends the spins or a Superman logo which will add a life and prevent the next clock from ending the round.

X-Ray Vision Spins - 15 spins in which if the 'X' lands on reel 3 it will add 1 Wild to both reels 2 and 4 as well as being wild itself. Like all these bonuses, no retrigger is possible.

Lois And Clark Bonus - a pattern of 30 Superman logos is picked from and once you've picked 5 the same and thus filled a bar by one of 4 different awards, you get that prize. Top is 100x stake, second 50x third is 20x and lowest is 10x stake. You can however pick 2 special tiles, one doubles all the prizes and the other adds one pick to all 4 progress bars.

Superman 2 slot also has the Marvel DC progressive jackpots, 4 levels from Mini to Grand which can be randomly awarded on any spin.

Superman 2 slot has clearly had much effort put to its use of the DC Comics License. Movie clips and the soundtrack from it feature regularly and the graphics are top notch. There are imaginative bonus rounds although none will offer a huge hit and I'd be very surprised if you hit over 250x stake for one although it does come in relatively frequently. Therein lies the issue that may put some players off - the lack of big win potential and many low value wins thus making the game quite low in volatility. We should not be surprised by this, as the same format is used in other Playtech DC Comics-themed slots such as Man of Steel slot  and Green Lantern. The Superman 2 game is fun though and very entertaining with a RTP of 95.95% including the Marvel Jackpots contribution of 0.99%. This slot is clearly worth a trip to the great Metropolis...