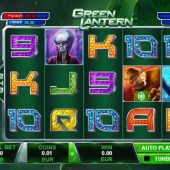 Green Lantern slot by Playtech is the later version based on this DC Comics-inspired character. The first being the 50-line Amaya Green Lantern slot, which was released several years earlier. We certainly see an immediate difference, with this Playtech slot being a 243-way game, over 5 reels and 3 rows. It is (yet) another DC Comics licensed game like the Batman games, such as Mr Freeze Fortune and Batgirl Bonanza, offered by Ash Gaming via the Playtech casinos. Green Lantern first appeared back in the 1940's with Alan Scott as the name behind his character.

As usual with the licensed slots the graphics are polished and quite exciting with the Green Man himself zapping an energy beam across at your start button should you not be playing fast enough for his liking! The pays are quite low as the top - paying character only awards 12.5x stake for a 5-of-a-kind win down to the lowest card symbol the 9 paying 1x stake for the same. There are single symbols and Wilds with no multiplier on reels 2 to 5. The slot is a 'cascade' game which means winning symbols are replaced by further tiles dropping from above and so-on until no more wins are attained. Some slots like Netent's Gonzo's quest add a muliplier for each successive win but there are none here until the bonus rounds.

Now speaking of successive cascade wins, they are how you attain the game's 3 bonus free spins rounds. You have a meter around the start button which fills up for each successive win. If you get 4 or more you will get a randomly chosen free games bonus. The amount of wins is important as 4 or 5 successive will get you entered at 'Charge 1' in each respective bonus, 6 or 7 at Charge 2 and 8 or more at Charge 3. The bonuses and enhancements are :

Fear Fight Mission - Unlimited cascades but after each one ends all the symbols explode and and are replaced except the Wilds which fall to the bottom of the reel(s) and become sticky. If you enter on Charge 1, 2 or 3 you can accumulate 5 Wilds, 6 or 8 respectively. The games end when you have accrued the maximum number of Wilds for your charge level.

Training Center Mission - 10 free games with Grenade Wilds, Missile Wilds or Punch Wilds when triggered at Charge 1, 2 and 3 respectively. These are 3 different varieties of extra Wilds occurring each spin to enhance the possibility of wins.

Green Lantern slot joins Man of Steel and the Batman series in the ever growing army of DC Comics slot games. This game has a lowish RTP in relation to others of 94.95% of which 0.99 is for the Marvel Progressives available. The sound effects on each cascade and win become very irritating very quickly and big win potential is low considering the poor base game pays and the limits these bring even with enhanced bonus rounds. Bonus games take quite a while to trigger and you are annoyed constantly by seeing 3 identical rows land on the first 3 reels which leads to 3 cascade wins and somehow not the fourth necessary to trigger it. Like his comic book enemies I'll be making every effort to avoid Green Lantern...