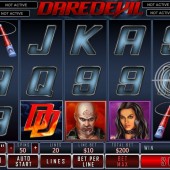 If you enjoyed/endured the big movie tie-in of the Marvel comic, Daredevil, you should get a real kick out of/ absolutely hate this slot from reputed developer Playtech.

Daredevil is more or less based on the film version of the enduring comic, but the characters on the reels only bear a passing resemblance to the actors. Ben Affleck's Daredevil here looks like The Joker in a red mask, Colin Farrell's Bullseye could do with a good night's sleep, while Electra seems to have stepped off the set of a completely different film.

Making up the reels is the Daredevil logo, Daredevil's nunchakus and Electra's swords. There are also some chrome-style 9-through-Ace icons.

If you're not familiar with the story, Daredevil is the night-time alter ego of blind lawyer, Matt Murdock, using his incredible sense of hearing to navigate his way around the rooftops of New York dishing out justice his way.

Daredevil is the Wild here and he substitutes for all regular symbols other than the Scatters. Five Wilds pays a nice 5,000x line bet jackpot.

All Marvel slots are linked to four separate progressives which can be won randomly after any spin. Entry to the jackpot game sees you picking out hidden symbols from a 5x4 grid: simply match three symbols and you'll win that jackpot.

Bets range from $0.01 to $5 a coin but with this particular Playtech game you can raise the line bet to 10 coins. A maximum bet of $1,000 per spin is not to be sniffed at, and also it gives you a better shot at those juicy progressives.

Look out for Daredevil's flaming call card - the DD symbol. This Scatter awards 10 free spins if you hit three or more anywhere on the reels. You'll also bag yourself some random Wilds to go along with your spins.

You can play this before every spin. Click on one of the 15 reel spots and if Bullseye lands within the crosshairs you'll win 3x your total bet. The crosshairs will stay in place for subsequent spins until you move it.

Daredevil is a nice little game that brings to mind some of Cryptologic's DC Comics tie-in slots like Flash - The Velocity and the highly-addictive Wonder Woman slot.

The bonuses are OK, but weirdly there are no animations or cutaways from the original film. Maybe the pummelling that the film received from critics and fans was too much for Playtech to bear.