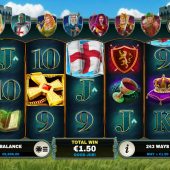 Glory Britannia slot may have been slightly mis-titled here as the game is very much themed on medieval England before there was a 'Britannia' but nevermind as there's plenty of jousting and japes going on here. The appearance is similar to that of IGT's Medieval Money with shades of the humour in Ash Gaming's Monty Python And The Holy Grail and as one would expect we get some gentle lute music from the period as we play. We see a pleasant countryside backdrop to the reels which are placed over the obligatory castle, but will our bankroll get seized forever by these knights of the realm?

Glory Britannia slot is played with 243-ways to win so no pay lines as such here on our 5 reels and 3 rows, for which we pay 30 coins to spin - well, that's unless you want to hire the characters out to reap the benefits of their respective features. Before we get to the characters the basic 5-of-a-kind symbols appearing on the reels pay 500 coins for the Shield, 250 for Crown or Goblet, 100 for Ring or Book with six card values paying either 75, 50 or 20 coins for a full way.

There are Gold Wilds on the centre 3 reels and like the other icons they all appear singly. The scatters are the Cross of St. George but before we get the 3 or more necessary for our bonus here, we must assess the benevolence of the 7 characters which are lined up above the reels!

Right, in order to get the possibility of the 7 random features we must pay 10 coins extra for each one, so there is a 'shop' where you activate them. If you choose all 7 your stake is thus raised to 100 coins per spin, but you can choose none or any amount or combination you like.

If you land 3 or more St. George Flags then 15 free games are awarded. You cannot retrigger them but we do get an extra row in play to increase the game to 1024-ways for the duration. Of the above 7 enhancements, only Lady of The Lake and Templar Knight cannot appear during them and if you were lucky and King Arthur had appeared on the trigger you may have even started with up to 35 spins!

Glory Britannia slot is visually very good with some nice graphics and animations too along with a soundtrack that won't assail your ears, so far so good. The only issue I have is the necessity of the Shop to buy the random features as you won't want to miss out on any and will therefore likely play at 100-coins which is high for a 243-way game. To further that, the RTP is higher if you buy them all at up to 95.94% whereas without buying any it's a terrible 91.89% so I am not particularly happy as the pays in relation to a 100-coin bet suddenly get far worse in terms of times-stake. The game isn't bad and quite fun, but the maths model makes it a very poor proposition overall. No glory here for me I'm afraid...