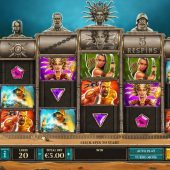 Kingdoms Rise Sands of Fury slot by Playtech is the third in a Trilogy of games at present, with Guardians of the Abyss and Forbidden Forest released in conjunction. They all have a fantasy theme and for this episode we are taken to the desert with our grid set over old ruins and temples in the sand, although not Egypt for once! Above the reels sit some greyed out and sinister looking Gods and animals which we will no doubt need to bring to life as we play. This slot is the one most similar Kingdoms Rise game in relation to one of the Age of the Gods editions, in this case Furious 4. So will the sands of time vent their fury upon our bankroll?

We have a 20 pay line game here on Kingdoms Rise Sands of Fury slot and therefore 5 reels of 3 rows each. Symbols are single and the 5-of-a-kind pays are Wild 12.5x, Medusa 7.5x, Red Warrior 6x, Green or Blue Warrior 4x, Crocodile 3x and then you have four gems paying 1 or 0.8x for a full line. There are no scatters here as all the action occurs in-play courtesy of those Wilds and greyed-out tiles above the reels.

As you can see, there is a different character above all reels in the form of a stone statue. During play, these spin and can land on either crossed swords, 5 Respins or a chain.

If a Wild lands on any reel it will turn in to the character above that reel if the crossed swords activate it, and will lock in place anywhere else it occurs for subsequent paid spins until a chain lands and therefore unlocks it. Even better is the 5 Respins as the Wild is guaranteed to lock on that reel for all 5 of them and when it does, other reels can still land their Wild features. If you're lucky this can go on a good streak with the Wild holds and respins accumulating and as there's no triggered feature here you'd better hope it does.

When Gold Token lands over any symbol you get a token in your game account. Once 500 are accumulated you can enter the shop and buy the above feature of Wild Respins for various prices.

I reckon this game sits in the middle of the trio so far made in the Kingdoms Rise series. Kingdoms Rise Sands of Fury slot is better than Forbidden Forest (but what game couldn't be?) but not as entertaining as Guardians of the Abyss. Again we have a headline RTP from which 3% gets deducted for Progressives and 0.99% for the tokens so if that isn't activated at your casino you could only be getting 92.24% of the 96.23% headline figure. The graphics and animations are OK but it's frustrating waiting for those Wilds to accumulate into anything significant which theoretically they could for some big wins. Some of those sands of fury could be put to use in an egg-timer, as that's what will likely happen to your balance here...