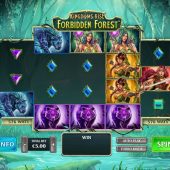 Kingdoms Rise Forbidden Forest slot by Playtech is the first in what appears to be a Trilogy of games at present, with Sands of Fury and Guardians of the Abyss released simultaneously. They all have an adventure-fantasy theme and in this instance we have a pool inside a forest glade as the backdrop and some classical mood music to complete the atmosphere. Playtech have already produced a series of slots, the Age of the Gods series with titles like Mighty Midas and Ruler of the Seas and some were better than others, so will our bankroll rise here along with this Kingdom?

The odd 3-4-4-4-3 pattern of reel rows tells us we have a 576-way game here so there are no fixed pay lines on Kingdoms Rise Forbidden Forest slot. Symbols as usual from this developer appear single or double-stacked but the pays are very low, indicating a low-volatility game even allowing for the stacks and the multiple ways they can create each spin. The top pay for our 10-coin bet is 5-of-a-kind Red Lady at 20x, Yellow Lady 5x, Green 3.5x, Bear or Wolf 2.5x and then you have five gems ranging paying 1.5 or 1x for a full way. You can get Owl Wilds landing on any reel except the first and this is really the only triggered feature, as we cannot count the Shop as one!

When the Gold Owl scatter lands anywhere on the grid aside from the first reel, you trigger 2 respins. If 2 land you get 4 respins and 3 will get you 12 respins. The Owl becomes Wild and will move randomly to any tile bar those on reel 1, and a feather on reel 3 grants you 2 more respins. Many useless spins will occur, you've been warned!

When Green Jewel lands on any reels bar the first you get a token in your game account. You need to collect 500 before they are credited to your bank and you can use them to buy Night Owl features which are the same as above except you get stacked Owls. So 300 coins buys you 3 respins with a double-stacked Owl, 750 3 respins with triple-stacked Owl Wild and 1500 gets you two double-stacked Wild and 3 respins. Feathers can still land and get you 1-2 respins for the 300-coin option and 1-4 for the other two options.

I'm not sure what Playtech are thinking of here aside from getting players stuck to the game in order to trigger a potentially better feature than the slot offers in normal play, by giving silly amounts of tokens to collect. Combine the fact that Kingdoms Rise Forbidden Forest slot has only got a 92.99% RTP without the 3% jackpot contribution and I'm afraid to say this is one to avoid. The game doesn't even look that good with basic graphics and animations plus the feature is utter trash mostly when it drops in naturally. I promise you that your balance won't rise much, if at all, in this forsaken kingdom...