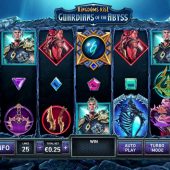 Kingdoms Rise Guardians of the Abyss slot by Playtech is the second in a Trilogy of games at present, with Sands of Fury and Forbidden Forest released simultaneously. They all have an adventure-fantasy theme and here we are taken to the depths in an underwater trench with many metal defensive hazards surrounding the grid and bubbles slowly rising from unseen creatures. Playtech have previously created a series of slots called the Age of the Gods with many titles such as Medusa and Monsters and Rulers of Olympus and like the Kingdoms Rise ones they are of varying quality. So will it be a rise or the abyss ultimately for our bankroll??

We get a 25 pay line game here so Kingdoms Rise Guardians of the Abyss slot and 5 reels of 3 rows each. Symbols are single and the pays are quite good now we don't have a multiway version. For our 25-coin bet the pays for 5-of-a-kind are Wild at 50x, Odeon 40x, Akali 30x, Jax 20x, Green Blade 10x, Red Blade 8x, Purple Blade 6x and then you have four gems paying 4 or 2x for a full line. You get Shell scatters on the middle 3 reels for the feature trigger and no random modifiers.

Having landed the 3 Shell scatters, you then click on all 3. One decides the type of free spins, the second the amount and the third the power.
Odeon Spins - any spin can add random Odeon tiles to the grid, the amount is decided by the power you picked.
Akali Spins - a random number of Wilds can be added, the more the higher your chosen power.
Jax Spins - if a Wild appears it gets a random multiplier, the higher according to your power selection.
You cannot get retriggers on any of them, but will get at least 3 spins.

This game is better than the first in the series but even so Kingdoms Rise Guardians of the Abyss slot doesn't quite hit the mark as your 96.09% RTP is made up of 3% Progressive contributions and the token collection takes more from the base game performance. That said, there's more going on here as far as the graphics and animations go and certainly in the bonus rounds which are interesting due to the combinations possible. Trouble is that there are so few spins it's over in a flash and big totals of 100x or more are very rare. I'm afraid I discovered that in this ocean, your money almost certainly will disappear into the abyss...