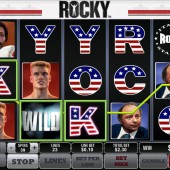 The same couldn't be said for (all of) the subsequent sequels, but there's no doubt some classic characters emerged along the way. Clubber Lang (Mr. T in boxing gloves) from Rocky III, Rocky IV's steroid-loaded Drago, Rocky's put-upon wife, Adrienne, and brother-in-law, Paulie: all are present and correct in this 5-reel, 25-payline slot from Playtech.

Elsewhere on the reels there's an image of The Italian Stallion's nemesis, Apollo Creed, plus star-spangled bannered R-O-C-K-Y letters. These can win you lots of free cash if you manage to spell out 'ROCKY' across the five reels. Do that and you'll win 5x your total bet.

Look out for Rocky himself - he acts Wild and substitutes for all regular symbols other than the Scatters. Five Rockys pays out a nice 10,000-coin jackpot.

Earn at Least 15 Free Spins with a 2x Multiplier

The Italian Stallion icon is the Scatter and three or more on the reels anywhere activates free spins with 15, 20 or 25 spins up for grabs depending on how many qualifying Scatters you land.

A 2x multiplier is attached to all wins too and extra Rocky Wilds are added to the reels to bump up those wins. Spins can be retriggered but you'll only win 15 extra freebies at a time.

Watch Rocky Punch His Way to Wins in the Knockout Bonus

First, choose Rocky's opponent - Apollo, Drago or Clubber. Rocky will fight the opponent in a 10-round match. If Rocky wins a round you win cash - simple.

Rocky is a fun little tie-in that won't exactly get the pulses racing but does evoke some of the atmosphere of the original films.

There are some brief video clips from the films, but only during the free spins round, and there must have been a problem with music licensing as the theme music used sounds made-up and a bit cheesy.

However, sport and film buffs alike will get a kick out of the multiple bonus rounds here. If you like this, check out NetEnt's excellent Fisticuffs slot for a bit more noise and razzmatazz, while Jungle Games - the sporty slot from the same developer - is packed with knockout features.