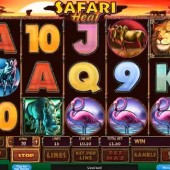 Robert Redford swatting away flies in Out of Africa; Elton John going on about circles of life in The Lion King, and Michael Caine trying to stop Zulus from throwing those bloody spears at him: it’s fair to say the African landscape has inspired romantic notions over the years.

Well, slots developers are no different, and online slot developer Playtech’s Safari Heat is one of the best games for dropping the player right in the heart of the Serengeti. If the beautifully-rendered graphics or FX don’t grab you, the simple gameplay and tasty jackpots will.

Classic Safari Symbols On the Reels

Elephants, flamingos, rhinos, lions, and zebras are all included on this 5 reel, 15 pay-line slot’s wildlife-themed reels, along with the usual 9, 10, Jack, Queen, King and Ace.

As you’d expect, the king of the jungle - or the safari, in this case - is the game’s Wild. It substitutes for any symbol other than the Scatter.

In addition, the Lion symbol awards a 2x multiplier for each winning combination it completes. Hitting five Lion Wilds on an active payline triggers the top fixed jackpot of 10,000 coins.

The African Tree symbol acts as the Scatter, awarding 15 free spins when three or more appear anywhere on the reels. Any wins gained during the free spins are also tripled.

If you enjoyed NextGen's African-themed Super Safari, or online slot developer Betsoft Gaming’s stunning 3D safari-themed slot, Sam Safari, you’ll be certain to enjoy this. It may not offer the graphics or cool bonuses of those two games but certainly forms another nice taste of the exotic for slots fans bored of the humdrum.