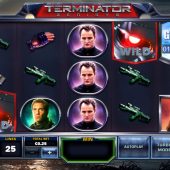 Terminator Genisys slot is themed on the 5th film in the Terminator series which goes by that name. The previous slot using this licensed theme was actually released by Microgaming (Terminator 2) and famous for its mystery 'Hot Mode' in the free spins. Terminator Genisys movie was released in 2015 and as before we see the ageing Arnold Schwarzenegger take a lead as our Terminator character and wage the battle against Skynet on behalf of the 'Human Resistance'. There is as expected dramatic music from the film's score as we play and the grid lies over a devastated San Francisco bay under a charred Golden Gate Bridge. Clips of the movie appear when features are triggered, but will playing here mean the termination of our bankroll?

There are 25 paying lines on the standard grid of 5 reels and 3 rows here with some icons stacked. The highest pay is Arnie (Pops) himself at 50x bet for 5-of-a-kind then Sarah at 30x, Kyle 20x, John 10x and the T-1000 6x. There are no card values for a change, instead we see the Teddy, Photo, Hand, Gun and Chip from 4 down to 2x for a full line. There are single T-Wilds on all reels a full line would pay 200x bet but that's not all - they can also multiply wins by 2, 3 or 5x on a random basis!

No Playtech film-based slot would miss the chance of a spectacular random in-play feature and here we are certainly not disappointed. You need to keep shooting the T-1000 to help Sarah and Kyle escape as they hurtle down the road towards the cityscape. You will earn cash awards, re-spins and possibly a multiplier of up to 10x to apply to your accumulated wins. A fun round indeed, and occasionally pays well!

You need to see the Genisys scatters land on reels 1, 3 and 5 to trigger a choice of free games:

1984 free games - go back in time to 1984 and save Sarah from the Terminators. You will get 10 spins and the T-1000 is the Wild as in the base game with a possible 2, 3 or 5x multiplier applied to any wins. Now though they will stick in place when landing until they form a win. All Wilds you saw will return for a final spin with big-win potential, which means no retrigger can occur. Medium volatility.

2017 free games - try to end Skynet save the world from Judgement Day. 10 spins but all Wilds now become a stacked Genisys symbol which lock in place until they form a win. Only 1 stack can appear per spin though and the volatility is high!

Terminator Genisys slot pulls off the film theme very well, with some good film clips and great animations, even if the initial appearance is quite basic. You won't get tired of the soundbites and effects plus there are some good pays available in the base game. The random feature is entertaining as are both the free games choices you can take. The returns aren't usually huge by any means but they occur with a reasonable frequency. The RTP lies at 95.75% so is typical Playtech fare in that respect. I'm not saying I want to be transported back to 1984, but I'll happily be sent back to Terminator Genisys for another visit...