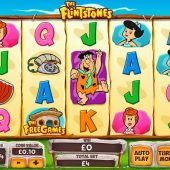 Sorry, I couldn't help myself.

The Flintstones - it was only a matter of time before one of the big slot developers produced a slot on this nostalgic cartoon theme.  The format is 5 reels and 4 rows with 1024 ways - no paylines in Bedrock!  Needless to say it has the annoyingly catchy Flinstones bckground music and Fred himself is the highest-paying symbol awarding 10x stake for 5-of-a-kind (5OAK). Barney Rubble also has a leading roll and is stacked 2-high along with the dinosaur Wild which doesn't multiply.

The remaining symbols are single; the ladies such as Wilma are only afforded this in true caveman style, but Bedrock did exist before the Equality Act came in! The lowest J, Q only pay 1x stake for 5OAK but this is usual for multiway slots.

A multi-featured branded slot, why of course...

It wouldn't be a huge licensing deal with an international studio unless the game was packed to bursting with features. To the point where I need a memory of a genius to remember them all.

Should Fred's cave appear on reels 2, 3 and 4 of the Flintstones slot you are awarded free spins. There is a choice of 3 permuations;

The Great Gazoo - This awards 12 games should you choose it. The enhancement is that should gazoo appear as an extra Wild he will randomly turn some other symbols Wild to increase winning combinations.  The good news is that like the other 2 free spin bonuses you can retigger it.

Wilma Wilds - This feature grants you 5 free spins and in true housewife style she hoovers up any Wilds appearing after every spin, and on the last free spin she will empty her hoover bag over the reels which will then spin the remaining symbols for hopefully a nice result! Retrigger(s) especially useful on Wilma Wilds!

Dino Multiplier spins - You will be awarded 10 free games - randomly Dino may appear and dig up bones during any spin, which will multiply any win appearing by 2-10x. Our tame dinosaur does appear frequently enough though to make this round interesting and possibly lucrative!

Ten Pin bonus - Should a bowling ball appear on reels 1, 3 and 5 you get to play Ten Pin, or rather 'Ten Bone' bowling.  You choose a bowling style which awards a cash amount, which is then multiplied by the amount of skittles you score. Should you get a strike, you get another go for more multiplication madness!  This can pay a decent amount, unlike many equivalent pick-type slot bonuses.

The Rocky Road bonus - Believe it or not we haven't finished yet! There is an in-play random feature. Fred and Barney may roll in during any spin and disperse many mystery ? symbols over the reels which will then all become the same symbol. A wheel spins for a multiplier which is then applied to the resulting win. Bedrock never sleeps!

The Flintstones slot is very entertaining, with a high frequency of smaller wins. The features are reasonably common and the variance isn't too high.  The RTP is 94.5% which isn't among the highest values you will see on games nowadays but the gameplay makes this barely noticeable.  I am pleased to say that it is more Yabba Dabba Do then boo hoo. It certainly beats some of the more recent Playtech-branded slot releases such as the cringy Ace Ventura slot or the not-so-popular Six Million Dollar Man.