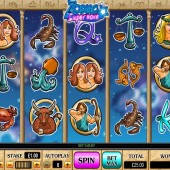 If the back pages of tabloids are anything to go by, people love reading up on their horoscopes; those ‘predictions’ letting you know what your day/month/year holds in store, all by the position of various stars in Uranus (snigger).

Constellations and star signs form the basis for Playtech’s Zodiac Supernova, and even if you’re not into zodiacs and horoscopes there is still a lot to admire on the five reels.

In fact, at first glance you would be forgiven for mistaking this Playtech slot with Bally Technologies' own serene slot release of Cupid and Psyche. I'm not the biggest Bally slots fan so you can imagine my relief that wasn't the case!

The graphics are gorgeous and there’s a fairly effective starry night backdrop to give the slot atmosphere.

As for symbols, every sign of the zodiac is represented: Taurus the bull, Gemini the twins, Cancer the crab, Aries the ram, and so on.

There are also some conventional Queen-to-Ace icons written in a swooshy font to make up the reels. The top payer is Leo the lion, awarding a 5,000-line bet jackpot when hitting five across the reels.

Unfortunately, you won’t find any bonus games in Zodiac Supernova – or Wilds and Scatters, for that matter – but the biggest draw of the game is the Exploding Reels feature.

All winning combinations across the reels will explode and disappear. Empty positions on the reels are then filled by symbols falling into place. Essentially, it’s the same as Tumbling Reels or Cascading Reels in other developers’ games and is a slots fan favourite whatever game it is featured in.

If you’re a fan of the mythical, there is a plethora of magic-themed online slots out there.

Equally, there are tons of slots utilising the 243 ways to win format too. Closing your eyes and sticking a pin in any online casino will usually result in you coming up with an amazing game to play, so for argument’s sake, why not check out Microgaming’s movie tie-in slot, Terminator 2, while NextGen Gaming’s myth-themed slot, Medusa II, taps into the world of fantasy whilst also offering gamers 243 lovely paylines.