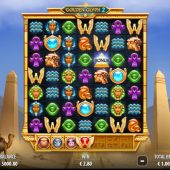 Golden Glyph 2 slot by Quickspin returns us to the ancient world of Egypt with a desert background, pyramids and Cleopatra's Needle. The original Golden Glyph slot was Quickspin's answer to Play'n go's grid games like Viking Runecraft slot and of course the (for some reason!) popular Reactoonz slot. So can we blow the sand away for some gold or will it be our bankroll baked in this hot sun?

On The Reels...
The tumble mechanic is the foundation here of the Golden Glyph 2 slot with a 7x7 grid having new symbols cascade in to replace winning tiles. You need 5 or more adjacent symbols in a cluster to be paid with 15+ being the top awards. The best, Ra, is 150x bet for 15+ or 1x for the basic 5, and the lowest of the 9 symbols is the Wave at 7.5/0.20x bet. You have a bottom scroll of Power Up modifiers which you activate in turn by collecting enough winning tiles within the same spin.

Power-Up Features
The Power-Ups will be activated when you get a Power Glyph Blue Symbol in a win, these are created after any initial win. When there’s a non-winning screen, Power-Ups will be executed and activated in the order they were charged up on the bottom row.
Gigantic Wild - is placed in the grid
Golden Scarab - 4 to 11 random Wilds placed on the grid.
Patterns of Horus - 6 different patterns such as Ankh and Snake, these will be removed from the grid to allow new symbols to tumble in.
Golden Glyph - stays and moves between free spins as a Wild, only appears in bonus round maximum 4 in view. If a 5th. created, +1 free spin.

Free Falls
When you land 3 scatters you get 7 free falls and 3 for any retrigger. During the first free spin, the special Golden Glyph Wild symbol will be placed in a random location. This increases in by 1x each time used and remains on the grid but moves position after each use. You can get up to 4 in play at once and they multiply each other. The Power-ups are also active during the bonus.

Our View...
Golden Glyph 2 slot has a RTP of 96.09% and is effectively a hybrid of Jammin' Jars 2 slot and any of those Play'n Go grid slots mentioned in the introduction. So not really original but certainly colourful with nice graphics and very good animations and sound effects. You can buy the bonus in some jurisdictions with 50, 150 or 275x bet for 1, 2 or 3 Golden Glyph increasing multiplying Wilds placed on the grid at the start respectively. This increases the RTP slightly to a maximum of 96.60% for top buys. But you won't get the colossal pays possible on Jammin' Jars 2 so we see yet another slot which flatters to deceive...