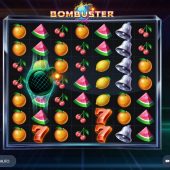 Bombuster slot by Red Tiger is an addition to their series of grid-based cluster games with quite a basic mechanic. A plain black background, synth beat music and retro symbols set the scene here and pretty little else. The quality of their grid games varies, from the awful Jack in a Pot slot to the only slightly better Gemtastic slot and they finally hit their peak with the far more exciting Tiki Fruits slot. The name here suggests our bankroll will either bomb or bust, so let's hope it might explode upwards in this instance!

You can see a bomb land during any spin but usually it's on a delay fuse and the three types all action a different modifier when they do finally explode:
Wild Bomb - a yellow bomb symbol which can remain on the grid for up to 200 spins before exploding. It will turn all tiles it destroys into Wilds.
Swap Bomb - a green bomb which can remain up to 50 spins before exploding and when it does, all tiles it destroys are turned into the same symbol.
Destroy Bomb - a red bomb which can remain up to 3 spins and when it explodes, the destroyed tiles are replaced from above like a normal spin.

Bombuster slot is a reasonable game if you like simple low-tech slots to leave on autoplay. It has a 95.74% RTP, simple sounds, graphics and animations so is distinctly average in just about every way. Sure, you can win thousands times stake in theory but like most slots of this ilk anything over 300x would be a very big and unusual win. I can't think of a good reason you would want to play this, nor a reason why you shouldn't but it's hardly made a bang in the world of slotting...