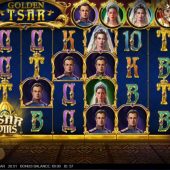 Golden Tsar slot by Red Tiger takes us back in history to imperial Russia before the Bolshevik revolution in 1917 and the murder of these unfortunate royals. The reels lie over the splendour of a ballroom in the imperial palace with the family prominent in the range of symbols. The music is classical from the period and I can't recall a game with exactly this theme before now, so at least it's original! I resent mentioning the awful Microgaming Romanov Riches in the same breath as this, Thunderkick made Babushkas slot which is a tenuous link I must admit so that's it for Russian themes. So will it be Faberge or failure for our bankroll here?

On the reels...
There are 30 pay lines over 6 reels of 4 rows each on Golden Tsar slot and symbols can appear stacked. The 6-of-a-kinds are Tsar Nicholas 25x bet, Tsarina 9x, Princess 7.5x, Prince 7.2x with five Cyrillic card values at 6 down to 3x bet for a full line. You don't get Wilds here but there is an in-play cumulative feature to watch out for. Above the reels the 4 Romanovs all have meters which fill each time their symbol forms a win. When full, during the next spin this symbol turns gold on the reels and wherever it lands it will expand to 4 rows high and pay scattered. Finally, a Faberge Egg scatter appears on all reels which is vital for the next feature.

So landing 3 or more Faberge Eggs grants us an amount of spins the game decides, minimum 7 but usually 9 or more especially if triggering with more than 3 scatters. The rest may be easy to guess for you; the game randomly fills one of the Romanov meters and this symbol is gold for the duration of the bonus and pays as an expanding scatter, Book of Dead slot style.

Golden Tsar slot certainly looks very pretty and gets the subject matter just right to be fair to Red Tiger. You won't win too much as this is a low to medium volatility game and a full screen of the top symbol only pays 750x bet. The free spins are something you'll have almost certainly played before with the expanding scatter format which of course is the highlight of an otherwise pretty tedious base game on this 95.77% RTP slot. A nice looking effort from Red Tiger, but hardly revolutionary...