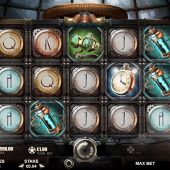 Nikola Tesla's Incredible Machine slot by Yggdrasil was actually designed by Rabcat apparently, who also designed games for Microgaming such as Castle Builder. Tesla was an inventor in the early 20th. Century who was reputed to have built a time machine, and whose name you may recall from the electric car company! Here the reels are set over a dimly-lit workshop and the coils are on top of the grid which presumably will have some effect on the game later on. Invention and mystery are great slot themes and we have Leander's excellent Codex or Betsoft's older attempt at Miles Bellhouse and his Curious Machine to compare to, but most important will this machine prove incredible for our bankroll?

We have 25 fixed lines on Nikola Tesla's Incredible Machine slot and symbols can appear stacked and singly. Tesla stacked Wilds appear on all reels and pay 40x bet for a 5-of-a-kind win along with the Watch, Goggles 20x, Capacitor 4x with three card values of 1x down to 0.4x. Your scatter is a simple free spins tile in yellow with no pay but we do have a modifier before we see the main event here.

Triggered by reel 3 having a full stack of similar symbols you get 3 bonus spins for the card values and 5 for the picture icons. You will randomly get Exploding Wilds, Reel Clone or Wild Substitution feature applied to them.
Exploding Wild - before the first bonus spin 2 or 3 random tiles will be turned in to sticky Wilds.
Wild Substitution - either the Ace, Capacitor or Goggles will become an extra Wild for the spins.
Reel Clone - Reels 1, 2 and 4 or 1, 3 and 4 or the centre 3 reels will become cloned for the remainder of the bonus spins.

If you land 3, 4 or 5 scatters you get 8, 10 or 12 free games respectively. The centre position of reel 3 becomes a sticky Wild and now those generators at the ends of the grid come into play. Spins pay both ways and you can get a Level Up tile randomly land. If this does, it adds an extra spin and will turn the top position of reel 3 Wild too. Another Level Up tile will make the final position of reel 3 Wild and add an extra spin. You can get up to 5 Level Ups and the final two will randomly add a sticky Wild to somewhere on either reel 2 or 4. No retriggers but visually a spectacular bonus!

Nikola Tesla's Incredible Machine slot is quite fantastic to look at and the Rabcat influence shows here by the fact that the game is not as volatile as most Yggdrasil slots, with frequent features. You'd never win more than a few hundred times stake on it though but will certainly get a run for your cash. The music and sounds brilliantly complement the appearance and although I am slightly biased in that I love this type of theme, I could have played this for hours. The RTP is 96.20% with graphical animations and effects the real clincher for me, so I say go to Tesla's electrical wonderland and see for yourself...