On 12th June, 2015, one of the most hotly anticipated movies of recent memory gets its world premiere. That movie is, of course, Jurassic World. No doubt a full-scale marketing circus will ensue and in due time we will be gifted with a branded slots title based on the blockbuster.

So to celebrate the impending release of what is expected to be one of the biggest cinema hits of the year, I have compiled my top 10 movie branded slots available right now. 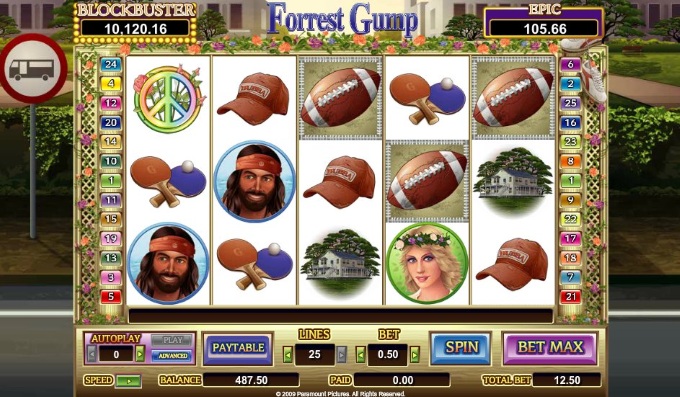 “Life is like a box chocolates. You never know what you’re gonna get” proclaimed the eponymous Alabama bumpkin in this multi-Oscar winning hit. Slots developer Cryptologic decided to take this analogy of uncertainty and use it to inspire a new title. Granted, this 5 reel, 25 payline slot might not be the most thrilling on the market and did not even manage to acquire any real action images of the characters from the movie but the inclusion of features based on a box of chocolates and Forrest running, we can’t really complain. 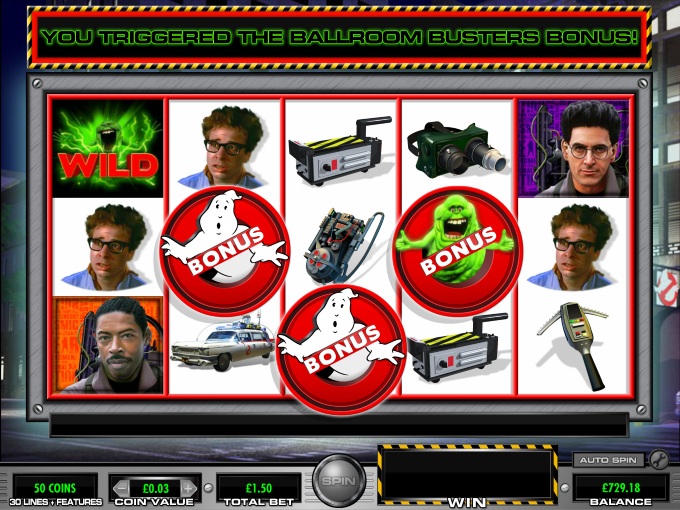 The masterminds at Las Vegas-based developer IGT might have earned a reputation for being some of the best in the game but they had their work cut out to deliver a Ghostbusters slot to the market. As one of the most recognised brands from the 1980s, Ghostbusters was certain to be a nostalgic hit with players. This 5 reel, 30 payline slot was never going to disappoint and IGT threw in a Stay Puft Bonus for good measure to keep fans of the franchise on board. The fact Venkman, Spengler, Stantz, Zeddermore, and Slimer are all on the reels only makes it more a spectacular release. 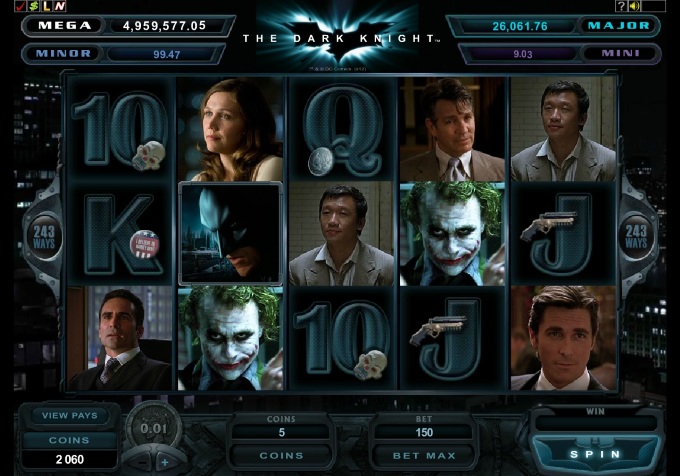 In 2005, director Christopher Nolan launched a new Batman movie trilogy with Batman Begins. Christian Bale played the hero and things got a little bit darker than they had when the Batsuit had nipples and Arnie was freezing people. The Dark Knight was the critically-acclaimed 2008 follow-up which was hailed as Heath Ledger’s most stunning performance as The Joker. Globally recognised developer Microgaming also saw the success in the movie and turned it into a branded slot. The 5 reel, 243 ways to win slot had just as much of a positive reception at casinos as it had in cinemas. Free spins, Wilds, random rewards, and a progressive jackpot ensured that a sequel was a formality and just a year later The Dark Knight Rises hit the casinos to the delight of fans all over the world. 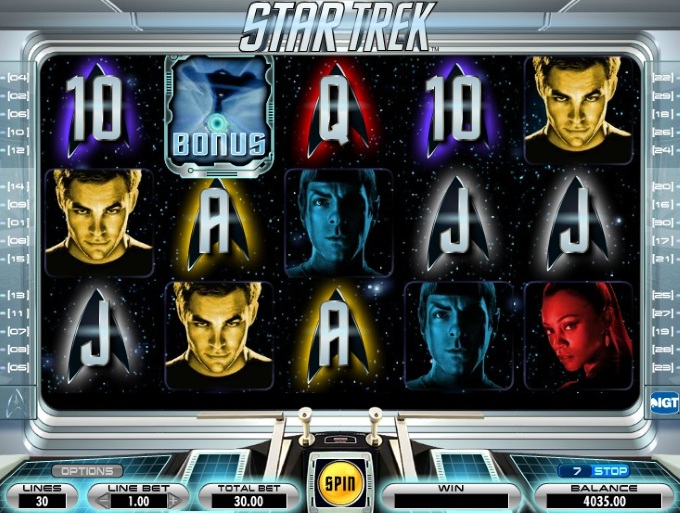 The Star Trek franchise has confused a lot of slots players. To summarise, the movie franchise was developed by IGT where as the old school television franchise was developed by WMS Gaming. Not sure where that leaves the likes of Deep Space Nine, Voyager, and the Next Generation but we can worry about that later. This 5 reel, 30 payline slot was based on the 2009 movie directed by J.J. Abrams and won a lot of “trekkies” over with its free spins, Extra Wilds, and bonus rounds involving Kirk and Spock. It also spawned a sequel in Star Trek – Against All Odds which proved to be just as successful. It must have been the Abrams magic touch! 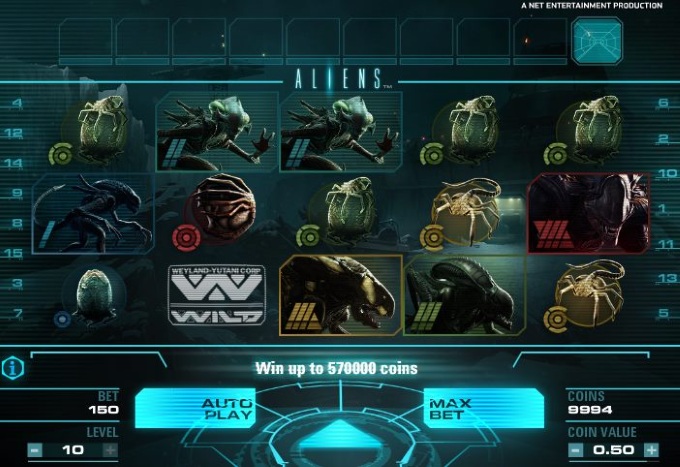 If you were a kid in the 1980s or you had an older brother or sister that grew up in that period then you will be familiar with the Alien franchise. Interestingly, Swedish slots developer NetEnt decided to skip the debut movie in the franchise and move straight onto the sequel Aliens that was released in 1986 and directed by James Cameron. The slot was not released until 2014 but that did not stop fans, who had seen their interest in the Alien franchise peaked by the Prometheus movie release, flocking to the slot at casinos. Possessing 5 reels and 15 paylines players would be required to navigate through different levels to win prizes. It was tough, it was complex, but it was brilliant. Plus, with a 570,000 coin jackpot up for grabs, who can complain? 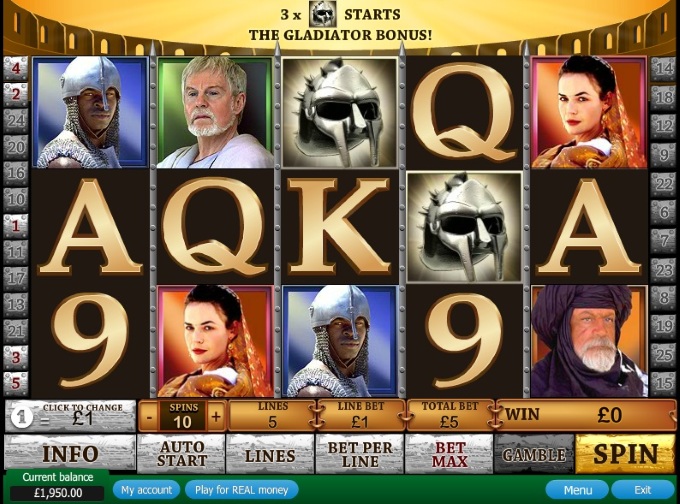 Back in the year 2000, Ridley Scott directed one of the most epic movies of all time starring Russell Crowe as Maximus Decimus Meridius out to seek revenge for the merciless murder of his wife and son through the gladiatorial arenas of Rome. The movie is now regarded as a classic and software developer Playtech tapped into the public’s desire to see more of Maximus and his heroic fights by releasing this 5 reel, 25 payline slot. Players can choose their own free spins and there is also a progressive jackpot linked in with this title where the biggest recorded win was a staggering £2,015,367, equal to $3,063,448 and €2,793,430. 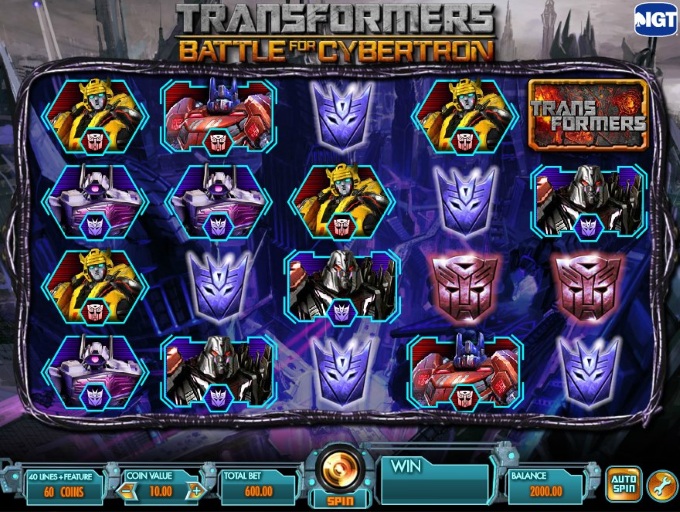 After director Michael Bay successfully destroyed any hopes that 20 somethings had of him releasing a decent live action Transformers movie back in 2007, IGT came to the rescue with their own vision of the Transformers story in their slot release. Under the Wagerworks brand, they initially released a Transformers – Ultimate Payback slot in 2009 but under the guise of IGT the 5 reel, 40 payline Transformers – Battle for Cybertron slot hit the market with FreeFall Symbols and fans of Optimus Prime, Megatron, Bumblebee and the crew celebrated as their childhood heroes finally got a brand release that matched their expectations. It was good to see that the annoyance that was Shia LaBeouf failed to make the cut. Unfortunately, so did the loveliness of Megan Fox! 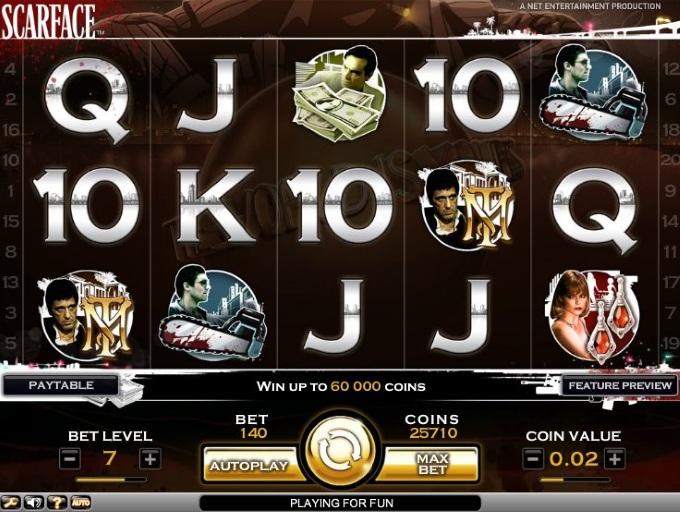 “Say hello to my little friend!” screamed Tony Montana in the classic 1983 gangster flick from Brian De Palma. Then a few decades later, due to a licensing deal with Universal Studios, NetEnt launched this 5 reel, 20 payline branded slot based on the brutal movie. The combination of Nudge Re-Spins and cut scenes from the movie proved a hit with slots players and fans of the movie alike. NetEnt has tried to recreate the magic achieved in Scarface with other slots through its partnership with Universal. Unfortunately, slots such as the Gothic Dracula slot and the eerie The Invisible Man slot have been good, just not this good. 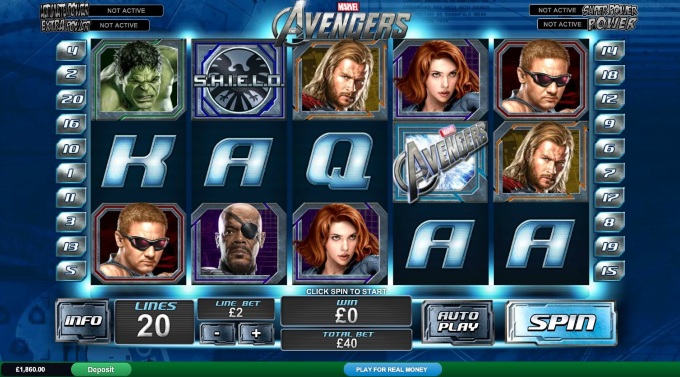 Playtech’s Ultimate Power Marvel progressive jackpots have become the stuff of legend over recent years. It has frequently paid out close to £1 million in winnings and is linked in to a number of Marvel-themed slots including the high-octane Iron Man slot and the thrilling Fantastic Four slot. Playtech then added this 5 reel, 20 payline tribute to its ranks and Marvel fans watched on in wonder as all their favourite characters appeared on the same game. A number of bonus features relating to each main character including Captain America, Iron Man, The Hulk, and Thor ensured that each character had their limelight. The Marvel Ultimate Power progressive jackpot only added more depth to a slot that really did not disappoint. There are already calls for Playtech to release an Avengers – Age of Ultron sequel off the back of the movie’s 2015 release. 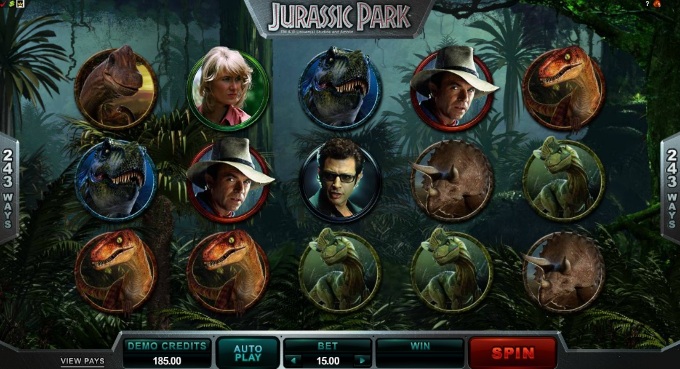 We end with the movie branded slot that relates the closest to the upcoming Jurassic World movie launch. Microgaming was the developer enlisted to create a Jurassic Park-themed slot and in the run-up to its release a number of rumours circulated about how the developer would approach such a slot. Upon its 2014 release, fans were not disappointed. The reels were packed full of the 1993 movie’s most loved characters including Dr Alan Grant, John Hammond, Dr Ellie Sattler, and Dr Ian Malcolm. The dinosaurs also make an appearance. The T-Rex Alert gives players the chance to hit Extra Wilds, there are free spins, and also five bonus features. Microgaming haven’t released a slot to this standard since and as Jurassic World nears its global release, fans of the franchise will be praying that Microgaming are already drawing up plans for a sequel slot to its Jurassic Park title that proved such a hit with slots fans across the world. Hopefully, they will skip Jurassic Park 2 and 3 then move straight to Jurassic World! Who doesn’t want to see an Indominus Rex bonus feature?!

That completes our top 10 list of movie branded slots. Do you agree with the slots we have chosen or do you have your own choices that failed to make our list? If so, give us a buzz onTwitter with your suggestions.