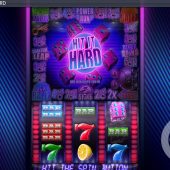 Hit It Hard slot by Elk Studios is one of those rare game board efforts by major developers which aren't just basic slots but have far more to them. A good example is Blueprint's Ted Pub Fruity and one of the originals to do this was Play'n go's excellent Eye of The Kraken slot. The theme here is modern like Elk Studio's older Hit It Big game with bright colours and neon over a dark background and synthesized music as we spin. So will this game hit our bankroll hard too?

It's quite simple here on Hit It Hard slot with 3 reels of 3 rows each and 5 fixed pay lines. The pays are Red 7 50x for 3-of-a-kind, Blue 7 25x, Green 7 10x, Triple, Double or Single Bars 5, 4 and 3x with Melons 1.5x, Lemon 1x and Cherries 0.5x. There is a Wild on reel 3 which will can have 2, 3, 4 or 5x multiplier displayed and a Die displaying 6 which counts as a 10x Wild for the spin but also triggers our feature here, which is usually over quickly but can be good. If your Wild on reel 3 doesn't yield a win, the reel will stick in place for one free respin to give you a second chance at a win.

Now when we see the Die land on reel 3, the board above the reels lights up and then shows 6 Dice showing 1 to 6 and you stop on one value randomly and move that amount of positions along the board. You will then have an amount of base game spins according to the value the Dice showed. You must have at least one win in order to throw the Dice again and continue. You can land on the following features:

Lucky Ballz - a mini pachinko game with 4 shots, all guaranteeing a win.
Super Ballz - the same but unlimited pachinko until you hit the same basket twice.
Break The Bank - collect two keys and land on the vault square to break the bank with the maximum win.
Stacked Wilds - get a spin with reel 2 Wild, then reel 3 Wild and finally 2 and 3 Wild.
Wild Spins - 10 spins with a guaranteed Wild multiplier on reel 3.
Quantum Leap - take a trip on the board far further than the Dice can award
Power Run - awards every feature you pass on the way according to what the Dice rolled.
??? Spins - awards addition spins, multipliers or possibly both.

Your feature ends when a Dice roll awards you an amount of moves and you don't win on that amount of spins.

Hit It Hard slot is quite interesting given that you can theoretically win a few thousand times stake and the feature can go on a while, accruing some good totals. Alas it often gives you just a 2 on the initial Dice roll and you don't win on either spin and it's all over until next time which can be quite a while later. Base game hits could be up to 500x with two Red 7's and a triggering Die on reel 3 but it's rare to see anything over 20 to 30x in the base game, despite the 96.30% RTP. That said, it's a well designed and quite volatile game and although I'm not sure I'd want to hit it hard with my money, I would hit it again...