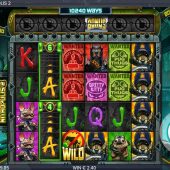 Nitropolis 2 slot from Elk Studios is the sequel to original and very strange Nitropolis slot, with its huge amount of potential ways per spin. As with the original, I can't really suggest a theme for what looks like a futuristic kind of dark urban subject overlaid with techno style music. We have the look of Yggdrasil's Wild Robo Factory slot and possibly the post-apocalyptic Kalamba Games' Machina slot here. Anyway, lets' hope Nitropolis can turn into Profitopolis here for our bankroll!

There are 4096-ways initially on Nitropolis 2 slot which gives us 6 reels of 4 rows each with stacked symbols. It retains the 'Nitro Reels' which occupy 2 rows on any reel they land on and produce 4,6,8,10 or 12 standard symbols or Wilds which effectively increase the ways. It's possible to get 2 on any reel so the maximum possible amount of ways is a crazy 191,102,976!
The 6-of-a-kind pays are therefore low as befits this mechanic and its 10,000x pay out limit. Wolf is the best symbol at 1x stake, 0.9x Doberman, 0.8x Cat, 0.7x Frog then we get 4 different colour Wanted Posters all at 0.5x and four card values all at 0.4x. No Dog Fouling (yes, really!) Wilds can appear anywhere and you have a Salty Dog scatter on all reels. There's many a modifier before we get to the bonus feature though.

All wins produce re-spins with only the winning symbols re-spinning, all others are held which is the reverse of games like Jack Hammer slot for one example. The Nitro reels will also hold and re-spin their symbol if involved in the initial win. Your game now diverges from the original in that each spin there are 6 positions, one above each reel, any or none of which may show a modifier for that spin:
Both Ways - wins paid right-to-left too.
Re-spin - all bonus symbols and Nitro reels stick in place and the rest re-spin, including symbols in the Nitro reels.
All Wild - all sticky and new landing Nitro Reels symbols will be filled with Wilds.
Nitro Wild - all Nitro Reels landing in the same column will fill with Wilds.
All Premium - all Nitro Reels landing will only be filled with premium symbols.
Nitro Upgrade - Nitro Reels landing in the same column are upgraded, in other words expand to hold more symbols.
All Match - all symbols in all of the Nitro Reels will fill with a symbol present on the reel to their left.
Nitro Match - all Nitro Reels landing will separately match up with a symbol on the reel to their left.

You need 3,4,5, or 6 scatters to gain 10,15,20 or 25 free games respectively. In this bonus, all Nitro Reels lock in place for the duration and you can retrigger the bonus in the same way as the trigger.  The modifiers are still present above the reels and effectively each Nitro Reel locked results in an increasing-ways scenario for remaining spins.

Nitropolis 2 slot has a RTP of 95.00% which is 1.1% less than the first edition, which is also the first reason why you should think about playing it. The slot looks pretty good and has imaginative sounds and animations with plenty going on due to the modifiers bar above the reels. Alas, this doesn't mean the base game is any more generous than on the rather stingy original although I would certainly say it's more playable. Free games are hard to trigger and do have huge potential but I can't see the point of this second edition simply reducing symbol pays in order to just add more possible ways into the equation. I named the first one 'Trashopolis' - I cannot be kinder with this slot either so for me it's christened Noughtopolis...