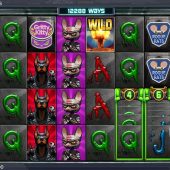 Nitropolis slot by Elk Studios is a game where it's pretty hard to determine the theme. We have an industrial background for the reels which seem to be set over some kind of electrical circuit box and some zany characters landing to beat music. The nearest examples I can recall are Yggdrasil's Wild Robo Factory slot although not as precisely subjective as this, Kalamba Games' Machina slot is probably a better comparison though WMS' Volts and Bolts comes quite close. So will it be a nitrous boost for our bankroll here?

There are 4096-ways on Nitropolis slot which results in 6 reels of 4 rows each and symbols can be stacked. There are also 'Nitro Reels' which occupy 2 rows on any reel they land on and produce 4,6,8,10 or 12 standard symbols or Wild which effectively increase the ways. You could get 2 on any reel and the maximum amount of ways attainable is 85,155,840!!
The 6-of-a-kind pays are 5x Doberman, 3.6 Cat, 3.4 Bug, 3x Mouse, 1.6 Dirty Dogs or Gritty Kitty, 1.2 Pug Thugs or Rogue Rats with four card values at 0.5x for a way of 6. Atom Bomb Wilds can appear anywhere and you have an Engine scatter on all reels. There's quite a few modifiers before we get to the bonus though.

All wins produce re-spins with only the winning symbols re-spinning, all others are held which is the opposite to games like Jack Hammer 2 slot for example. The Nitro reels will also hold and re-spin their symbol if involved in the initial win. These Nitro Reels have their own modifiers which can occur randomly.
Ways Upgrade - may increase the number of ways between re-spins or free spins from say 4 to 6 or 6 to 8.
Second Chance - when the re-spins end with a winless combination, the Nitro Reels can randomly re-spin to may be create another win and continue the re-spins.

You need 3 to 6 scatters to trigger 10,15,20 or 25 free games. During these all Nitro Reels lock in place for the duration and you can retrigger the bonus in the same ratio as the trigger. A symbol is also selected randomly to pay scattered during the bonus and you can win up to 10,000x bet according to the rules.

Nitropolis slot has a RTP of 96.10% and is certainly eye-catching and a different to most games although sometimes it's hard to follow what's going on here. The base game doesn't seem to produce many wins of over 20x bet so you are reliant upon the feature here which can make you wait a while but is entertaining and usually pays something worthwhile. When push comes to shove Elk Studios have simply tried to make a poor man's Megaways here and I'm not sure it works that well. So you decide whether it's Nitropolis or Trashopolis here...