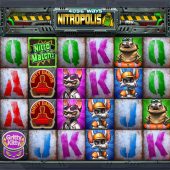 Nitropolis 3 slot by Elk Studios is obviously a sequel to the popular Nitropolis slot which was rapidly followed up with Nitropolis 2 slot. The game uses Nitro Symbols which are essentially the same as NoLimit City's xWays symbols and I'm not sure who copied who here, I'm pretty sure Nitropolis was first? Anyway we have the same post-apocalyptic urban theme here with techno animal characters and objects but this time over a tropical beach so perhaps they've all gone on holiday. The music is a dramatic-funk hybrid interjected with animal sounds and the game does look very good. So can we leave these shores with some of our bankroll or will it be gassed, bitten and chewed again?

Free Games Bonus
You need 3 to 6 Zeppelin scatters here for 8 to 20 spins via +4 for each one over the 3 necessary. You can get Super Bonus symbols in the triggering spin which are 1x2 in height and one or more ensures you play the bonus on both-way pays as a 'Super Bonus'! You can retrigger them too and all the special symbols above can appear during them. This time, increases in rows are held over and don't reset to 4 between spins and all Nitro positions are sticky throughout. You can literally end up with millions of ways before the end if you expand to 8 rows and have Nitros in a lot of positions. This results in a 50,000x stake win cap on what is a very colourful, exciting if not a little confusing free games round!

Our View...
Nitropolis 3 slot a 95.00% RTP and in some jurisdictions the bonus can be bought for 100x standard and 500x for both-way pays from the start if you want the Super Bonus. The base game can throw the odd monster win in and is very colourful, almost fascinating to watch and listen to what with all the special symbols which can appear, sometimes in tandem. Free spins can be an ordeal to land but are brilliant to watch and just one incidence of say the Nitro Wild can create some huge wins here, it can and does pay over 1000x with ease but equally you can get some real bad ones. If you have played any NoLimit City slots recently I'm sure you'll see the similarities they have to this game, big potential bonus yields often as a result of just one free game where everything lines up and expands for the player. Who says the sequels get worse as they progress?...