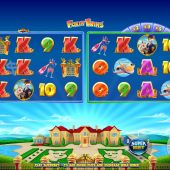 Foxin' Twins slot is the fifth Nextgen have produced featuring our furry friend, their cartoon fox. Initially we saw Foxin' Wins, then Foxin' Wins Again with more random features then Foxin' Wins Christmas and Football. Now you may be thinking there's two foxes and you would be right, but that's not the reason for the name - there's actually 2 grids in play here! The grids are essentially based on the Foxin's Wins Again version with the same cartoon music and sounds effects and the reel sets imposed over a picture of their residence, the Foxin' Manor. I hope that our bankroll can last longer here than the F-key on my keyboard is likely to before this review is done!

Foxin Twins has 2 reel set of 5 reels and 3 rows apiece over which we get 50 paying lines, 25 on each and this costs 25 coins. The 5-of-a-kind pays range from 20x bet or 500 coins for either the Green or Blue Fox Wild, 250 for Horse Riding Fox, 100 Aeroplane, 50 Manor Gates or Pink Champagne plus six card values of 30, 25 or 15 coins. You can get also get stacked Wilds on all reels with Blue Fox on the left set and green on the right plus scatters on all 10 reels. There are the usual random Modifiers but these can be enhanced by the Superbet options.

You can get the random extra Wilds on grid 1 when the Fox parachutes down under some balloons but only on reel 3. If you pay 50-coins for Superbet level 1 he can appear on the centre 3 reels, or all five if paying 100-coins for Superbet level 2. On reel set 2 the standard modifier is the wheel for any Green Wild Fox wins which can multiply them 2, 3 or 5x. On Superbet Level 1 these become 3,5 or 10x and Level 2 will be either 5,10 or 20x.

You can trigger a random feature whereby any Blue Wilds on reel set 1 can go Green for the spin. These will then utilise the multiplier wheel over the right grid for the left grid too.

You can now get 3 to 10 scatters on Foxin' Twins which will produce 10 right up to 100 free games. You can retrigger them and it is now possible to get more than one modifier on each spin. Not only that, but the right grid will now pay right-to-left too. You'll also see far more frequent Foxin' modifiers and Wilds. Foxin' fun indeed!

I'm not usually a great fan of cartoon-themed slots but I've always had a soft spot for the Foxin' series of slots because there is always something going on and you can, on occasion, hit some quite big wins. During Superbet base games a Wild Line can be multiplied up to 20x for a 400x bet hit which isn't too unlikely when you're in the bonus round. The graphics and animations are colourful and done well so you tend to forget you are actually playing a childish-looking game quite quickly. The RTP is 95.25% for basic stakes, 96.00% for Superbet level 1 and 96.75% for level 2. If you've the budget I'd recommend using the 100-coin option because the base game is quite gentle and shouldn't strip your bankroll quickly at all. I'm keen to come back here for some more double trouble...