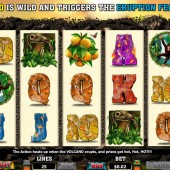 If, however, you’re after something hotter than a kebab with extra chilli sauce served in the best kebab shop in the Sahara - during a heat wave – this could be for you.

First - the essentials. Fans of friendly betting will warm (see, the ‘hot’ references keep on coming) to the range of betting on this 5 reel, 25 pay-line slot which starts at just $0.01. The graphics put you right in the middle of a tropical paradise with birds, monkeys, various fruit and lizards filling the reels, as well as the ubiquitous playing card symbols, and of course our not-so-friendly Dante’s Peak.

Five lizards will bag you the game’s biggest jackpot, but it’s the erupting volcano that’s the key here. Appearing on reels 2, 3 and 4, it substitutes for all other symbols to give you bigger wins. Not only that, it acts as the bonus symbol too. When one appears on all three of those reels the Eruption feature will be triggered.

Here, the Wild volcano in the centre reel will expand across the entire reel and the other reels are re-spun five times. Not bad, but there’s more. The animated volcano spews out Wild symbols onto the reels, bagging you even more prizes.

With its neat graphics and hot animation and Wilds galore, this is a competent offering from one of the best slots developers around. Isoftbet’s fiery dragon-themed slot, Breath of Fire, is a decent alternative to Hot Hot Volcano, or even the big progressive jackpots of Microgaming’s exotic Big Kahuna slot.