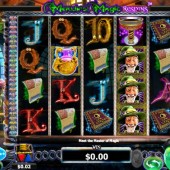 Slot developer NextGen Gaming has been releasing slots that I have a bit of a soft spot for. No disrespect to NextGen Gaming but I feel like they their slots are a bit more light-hearted than most. This Merlin’s Magic Re-Spins slot is an example of that.

Merlin’s Magic Re-Spins is a 5 reel, 50 pay-line slot that is the follow-up release to NextGen Gaming’s well-received Merlin’s Millions slot. It has a magical theme and Merlin continues in his efforts to help players become millionaires. In this version the emphasis is quite clearly on the re-spins!

The magical symbols all fill up the reels once again. There are the telescopes, spellbooks, potion recipes (or at least I think they are potion recipes!), a chalice and the regular 10 through to Ace symbols.

Merlin acts as the Wild and he will substitute for all other symbols, except for the Scatters, to complete winning combinations. He also plays a key role as part of the SuperBet feature.

Earn up to 5 Re-Spins with the SuperBet Feature

The much-loved SuperBet feature makes a welcome return in this sequel slot. For those of you unfamiliar with the SuperBet feature, it basically allows you to adjust how many Wild re-spins you can play with on this slot. There is the option to play where you can win up to 5 re-spins when a reel full of Stacked Wilds appears. On the original the SuperBet feature covered Wild multipliers so it has slightly evolved in this version and in my opinion is more entertaining.

The standard free spins bonus round also makes a return. This is triggered if you hit three or more purple potions in a golden dragon goblet Scatters across the reels. You will be awarded with 7 free spins immediately. This might not seem a lot but not only does the SuperBet feature remain active for the free spins but Merlin will randomly “enchant” symbols and turn them Wild so the chance of hitting Stacked Wilds and winning re-spins increases during the free spins bonus round.

Merlin’s Millions was a slot I enjoyed playing but felt it could have been improved with a bit of ingenuity. I feel that NextGen Gaming have managed to take this slot in the right direction in this sequel and this follow-up is definitely a more impressive version of the original. It’s not perfect though and the addition of an interactive bonus feature would really put this slot up there with the elite. For now though, it’s not immaculate but it’s a step in the right direction by NextGen Gaming. If you love the Arthurian legend theme in your slots then you might want to try the slightly more intense Avalon II from Microgaming.