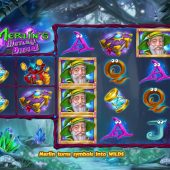 Merlin's Money Burst slot by Nextgen returns us to an old theme of theirs so we are reacquainted with their favourite wizard. Now the the Money Burst part of the title may give you a huge clue as to what this slot's all about, especially when you consider Nextgen are, like WMS and Bally, under the Scientific Gaming umbrella nowadays. We can see Nextgen's old wizard wearing a different coloured gown in Merlin's Magic Respins, Merlin's Millions and even a Santa gown in Magic Repsins Christmas Edition, so he's getting about a bit!  Here he watches our game that's set over an enchanted forest type of background with fairytale music and magical sound effects when wins land, but will this be Money Burst or money bust for our bankroll?

We have some unusual reel sizes here on Merlin's Money Burst with 4 single reels in a 2x2 pattern followed by 3 reels of 4 rows. This gives us 60 paying lines and a huge clue as to what I was referring to in the opening paragraph above. Before we confirm the thought, we pay 30-coins to play with the symbols both single and stacked and the 5-of-a-kind pays are 50x Wild Merlin, 17x Spell Book, 10x Pink Bottle, 3x Coins and Egg Timer with five card values at either 2x or 1x. Scatters in the form of Clawed Rubies can only appear on the 4-row reels 3,4 and 5 but we don't necessarily need them to trigger a bonus.

If you haven't already worked it out, this game uses the same mechanic as the WMS classic Bruce Lee Money Burst so this means there are 3 different free games chances.

Held Respins - if all 4 symbols are the same in the 2x2 block on the left, including Wilds then they are held and you get 5 respins of reels 3,4 and 5. Now there are Claw scatters on those so if all 3 land you get 5 further respins and Merlin may enchant symbols on those 3 reels to make them Wild too.

Merlin's Free Spins - 3 Claw scatters on reels 3,4 and 5 trigger 10 free games with Merlin adding Wild reels quite frequently. Can be retriggered and you could trigger Merlin's Wild Spins during them.

Merlin's Wild Spins - if you get 4 similar symbols in the 2x2 reels AND 3 Claw scatters you get 10 free games but the 4 symbols on the 2x2 block all become sticky Wilds plus you get a Wild reel on the last 3 reels too. Expect some nice totals if lucky enough to trigger this.

Merlin's Money Burst slot is simply Nextgen using the old WMS Bruce Lee mechanic and changing the format of the free games rounds slightly, maybe making the model less volatile. You have Superbet too in the base game where you raise stakes in order to get a multiplier applied to any wins involving Wilds, at 2, 4, 6, 8 or 10x if you raised to 250 coins per spin from 30. This would give you the top RTP of 96.75% whereas it's 95.50% if you play standard bet.

Like Bruce Lee you can win some great totals if triggering the top free spins but I guess that would be equally as rare. In the meantime for a childish themes the symbols, effects and animations are fine and the music won't grind you down so it is actually quite playable. There is potential in the base game with stacked Wilds and symbols plus the lower grade free spins rounds, which luckily aren't that hard to trigger. It is quite volatile overall though, so this Money Burst slot could also prove to be money burnt...

Eye of the Storm slot