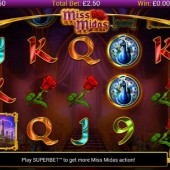 Slots developer NextGen Gaming are renowned for launching slots titles onto the market at a rate of knots and sometimes they are not always received too well. However, now and again, they do release a Foxin' Wins slot or a Medusa slot to keep the wolves from the door.

Miss Midas is another slot that has been released not too long after its predecessor. This 5 reel, 25 payline title is based on the daughter of the legendary King Midas from Greek mythology who was famous for turning everything he touched into gold. See, now you know where the phrase “Midas' Touch” comes from!

In this slot, it appears Miss Midas has inherited her father's golden touch. She acts as the Wild on the reels and substitutes for all other symbols, except the Scatters, to complete any winning combinations that could appear on the reels. Unfortunately, she does only appear on reel 3.

Other symbols on the reels include a peacock, throne, bowl of fruit, rose, and the regular 9-through-to-Ace symbols. The reels themselves are set against the grand structure of the castle belonging to the Midas dynasty.

Earn up to 25 Free Spins

Superbet is Back!
Miss Midas also comes with NextGen Gaming's popular Superbet feature. This is where you can alter the Superbet level to increase your chances of winning larger payouts and acts as an additional wager.

Miss Midas is a slot out of the blue and at first glance did not look to be up to much. The free spins bonus round can be quite lucrative but they are tougher to trigger than you might imagine. The Superbet feature is always a fantastic inclusion on NextGen Gaming mobile slots and combining it with the Midas' Touch idea is a stroke of genius. The fact remains that payouts are not that easy to come by on this slot but if you're going to work hard to get the wins, you might as well have fun doing it. For more mythical-related mobile slots gaming by NextGen, you should definitely check out their Genie Wild slot.